Gridlife and the First Model 3 In Competition Worldwide 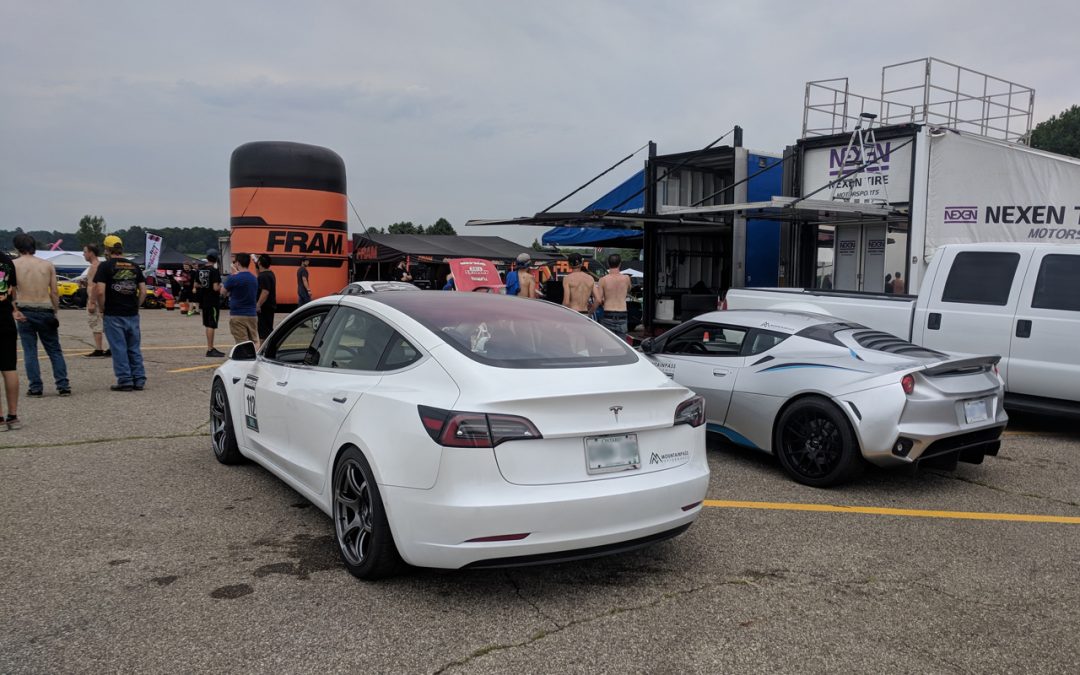 After receiving our Model 3 earlier than anticipated, we decided to make a big push to get it ready for GridLife, a motorsport and music festival that is one of the largest and most anticipated events in North America for the automotive aftermarket. Naturally we needed to get some wheels on the Model 3, so we ordered some Advan RGIII’s to pay tribute to our background of tuning and building Japanese sports cars. 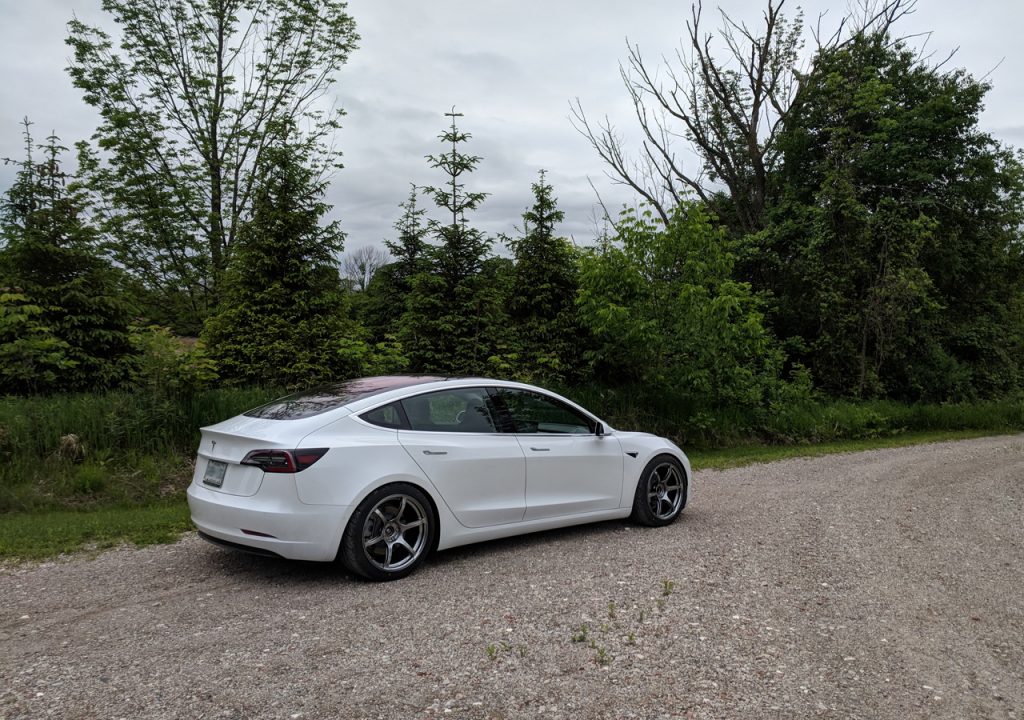 The wheel fitment is very aggressive, and that was the goal with these wheels as they are primary used for track duty. We wrapped them in Bridgestone RE71R tires as those are the best legal tire for the class we would be running at GridLife – street for the Tesla, and streetmod for Blue Lightning. The wheels are 19×9 +25 in the front, and 19×10  +35 in the rear – with a 245 front tire and a 275 rear tire. 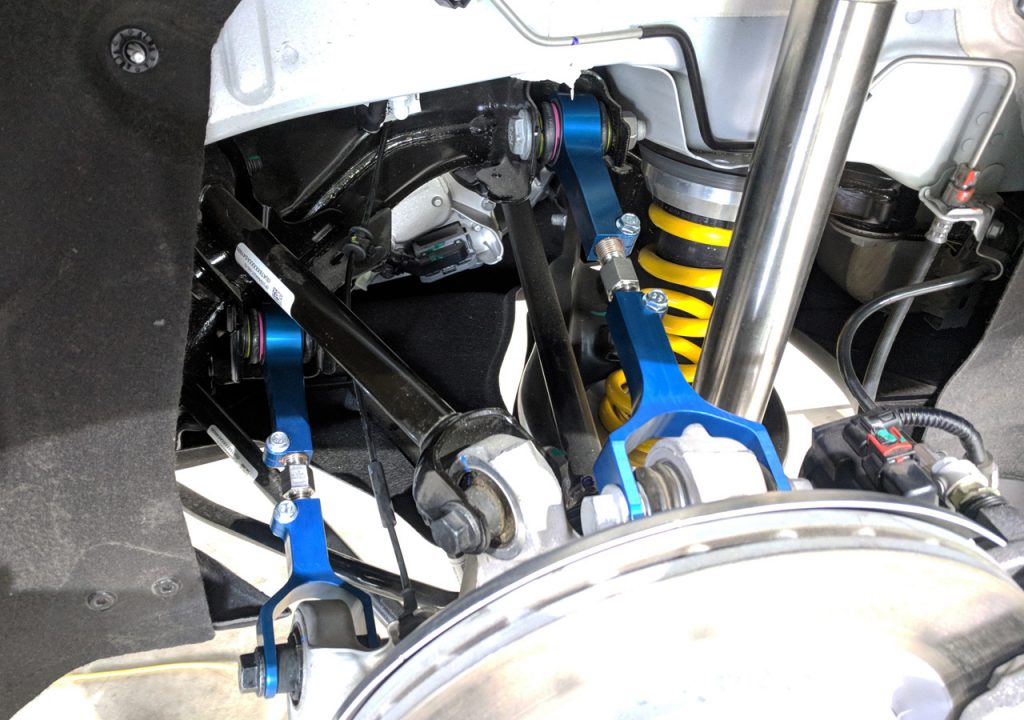 We also installed more higher rate springs in the rear of the car to help encourage rotation with the staggered tire size. We corner balanced and aligned the 3, prepared Blue Lightning and were off to GridLife! Oh and we installed Ferrodo DS2500 pads in the front of the Model 3, along with flushing the brake system out with Motul RBF660 to significantly raise the temperature at which the brake fluid would boil. 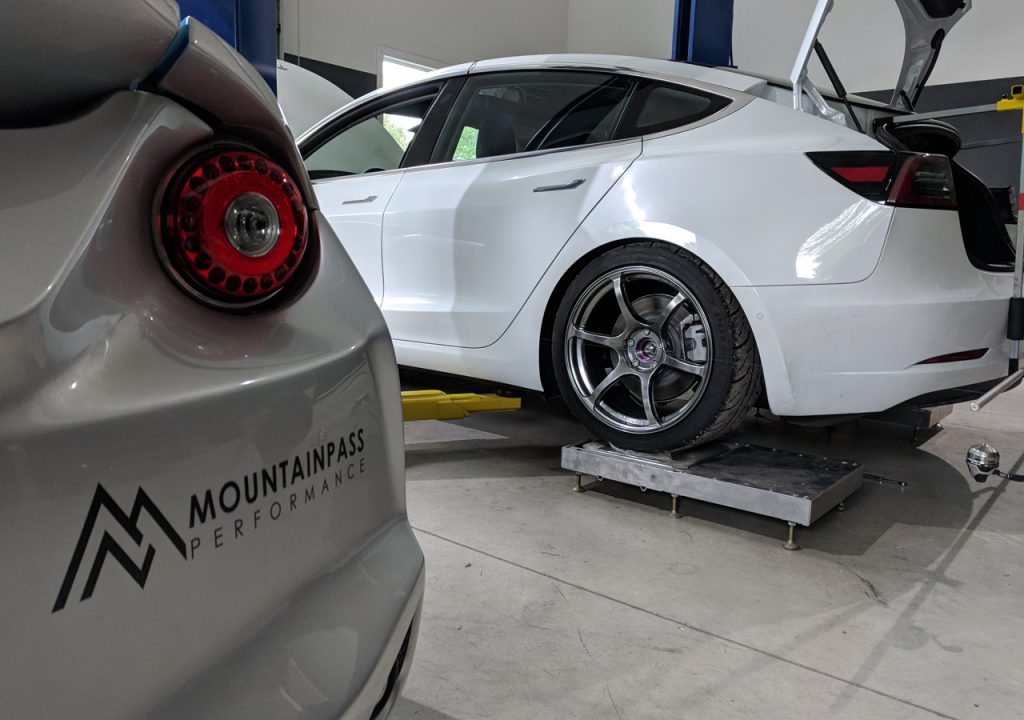 The Motec M150 harness went in, which we would use for lap timing and data analysis. Needless to say we got a ton of great nerdy data from the weekend. Unfortunately our big brake kit was not complete in time, but our backup plan was to have it shipped straight to the track. The bracket comes from our CNC machine shop, and the disc / hat from another supplier – they both came through and the parts were there waiting for us when we arrived! 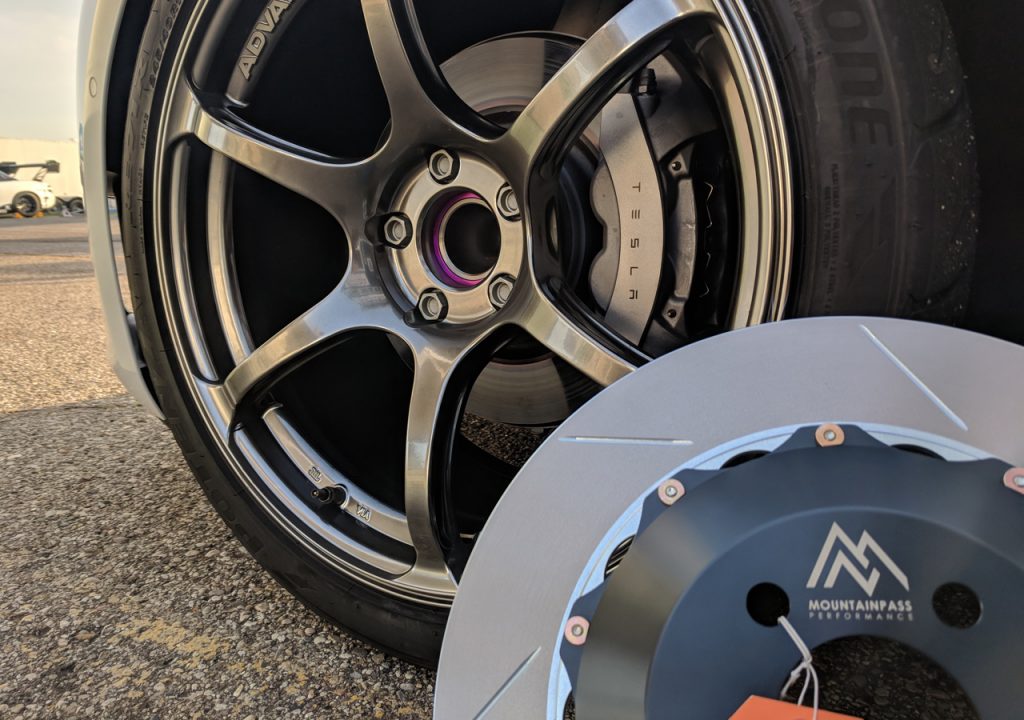 Chris from Dirty Nails Bloody Knuckles has been working on some T-Shirt designs for MPP, and we were extremely thankful that we were able to get a run of “The Future” shirts printed before GridLife! They are for sale here, so be sure to pick one up if you’re thinking about making an order! The shirts are awesome. One detail I love is the elevation maps cut out of the text of the roads we were developing on in California. 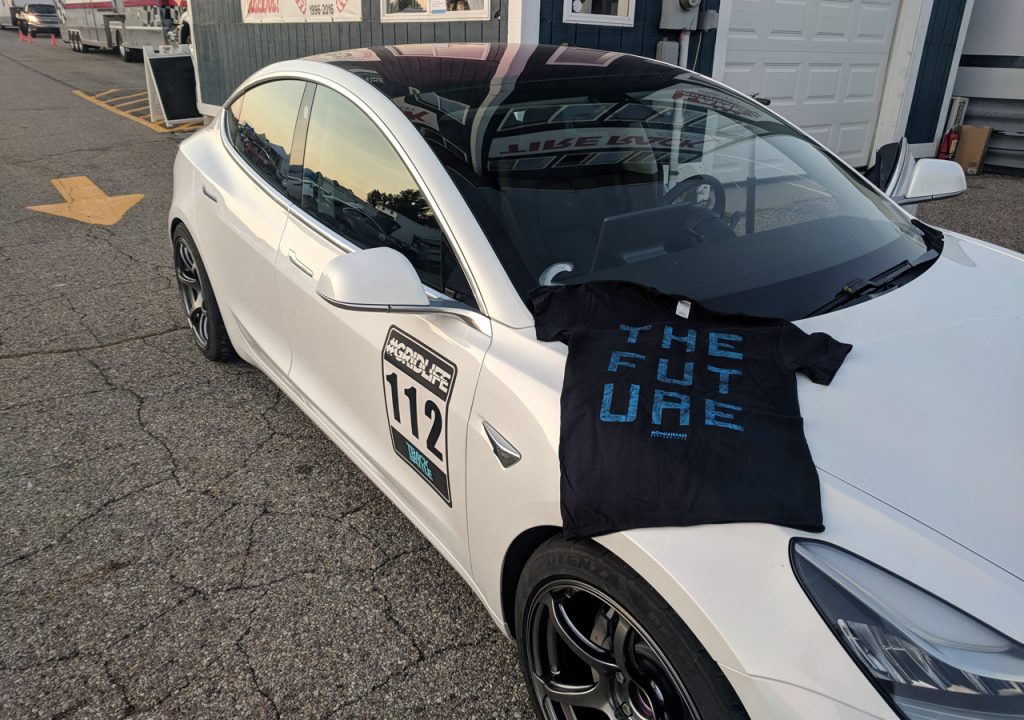 Upon arrival at the track we quickly put the Advan’s back on (18″ aero wheels and tires average around 150wh/km, the Advans with the RE71Rs were closer to 220wh/km on the highway! This wheel/tire combo is not a road trip setup!), and went out for a quick session to learn the track. We quickly realized that A) Sasha was totally unprepared driving wise and should have spent more time learning the track, and B) there was a lot of work to be done to make the Model 3 a fun and capable car on the racetrack. 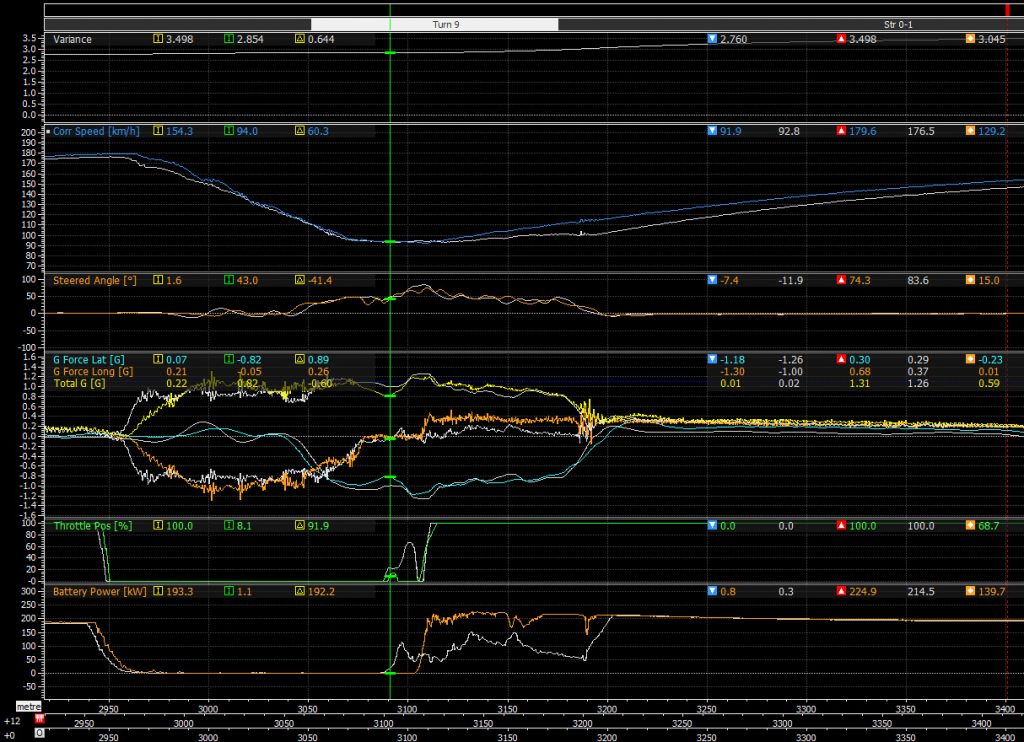 Compare “Battery Power” to “Throttle Pos” – The difference on this corner exit alone was .644 seconds!

It was the second problem that was most concerning. The stability control is extremely intrusive. Most likely magnified by the high grip RE71R tires, the ABS pump was commanding a lot of understeer management – which would significantly slow the car down when exiting corners aggressively, and while going through a high speed kink at Gingerman that can be easily taken at full throttle. The bigger issue though, was the fact that even under moderate steering angle and low lateral G force, the stability control/drive unit would not allow full power – more like it would only allow enough power to maintain your current speed! Needless to say this was worth seconds per lap. 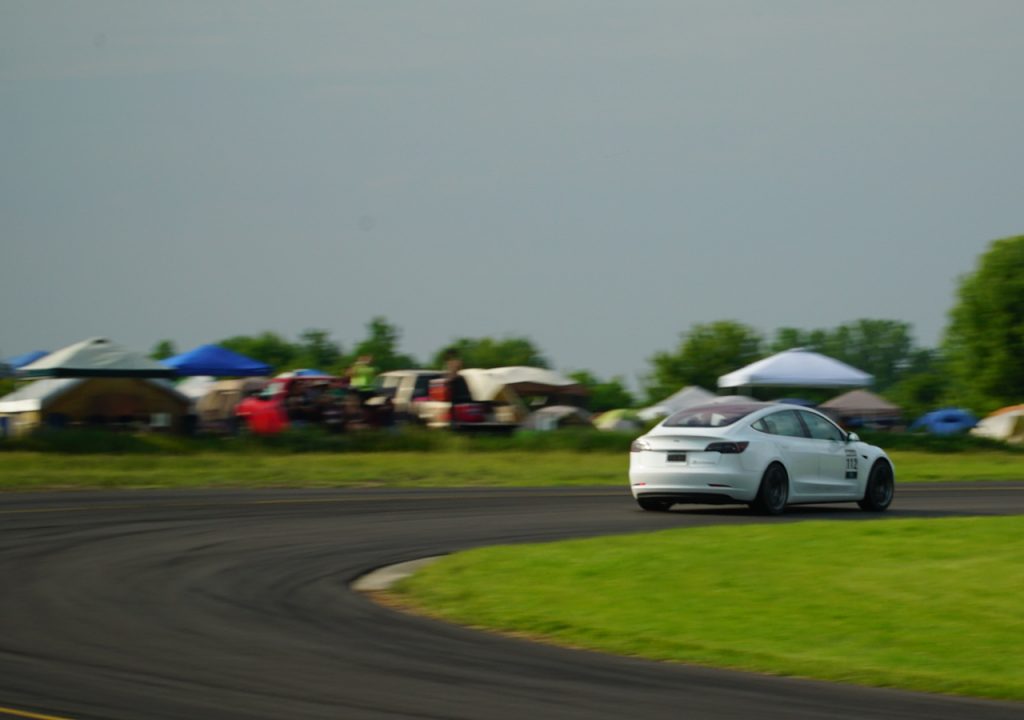 We then took Blue Lightning for a run, and while the car was very capable, it was clear that we needed to do some setup work as the car had a tenancy to oversteer on the RE71R tires on entry, which would overheat the tire very quickly and make a bad situation worse. Despite driving around the issue and tippy-toeing into corners, after only a couple of laps Blue Lightning posted the 2nd fastest time for it’s class in the session, but clearly more work was needed. 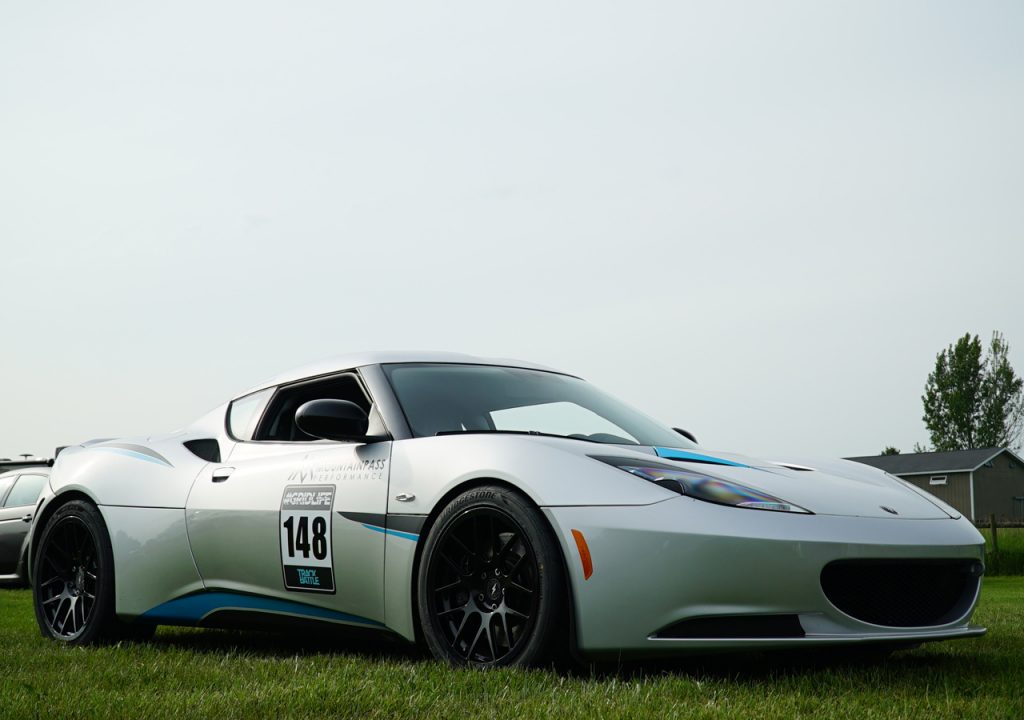 Unfortunately, more work wouldn’t be possible as the rain came and didn’t stop! That meant some uncomfortable conditions to work in, but it was a great environment to test solutions to defeat the stability control on the Model 3. We tested a few methods and found one that retained ABS and traction control, while totally removing stability control and the dreaded power limit while steering and accelerating at the same time. 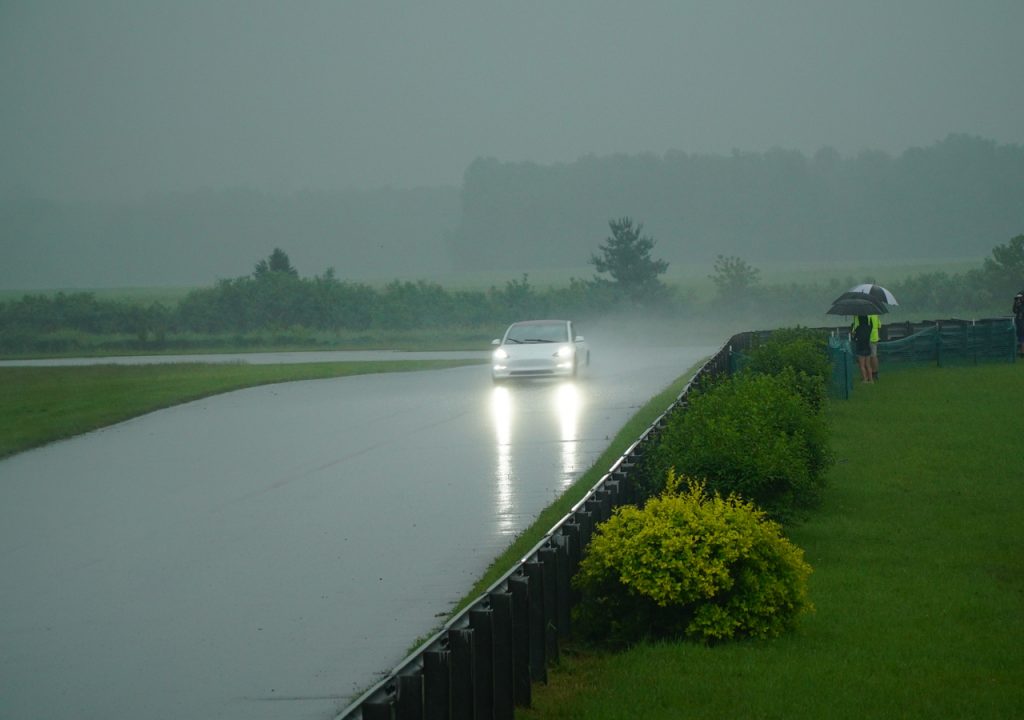 Those RE71R’s are no rain tires, and with 275’s out back the Model 3 was prone to hydroplaning. It was very hairy out there, with many moments at almost full opposite lock trying to keep the car on the track. But we put in some very fast times in the wet, and many people took notice. The Model 3 is a great wet weather car, I’d love to get some rain slicks on it to see how it does! 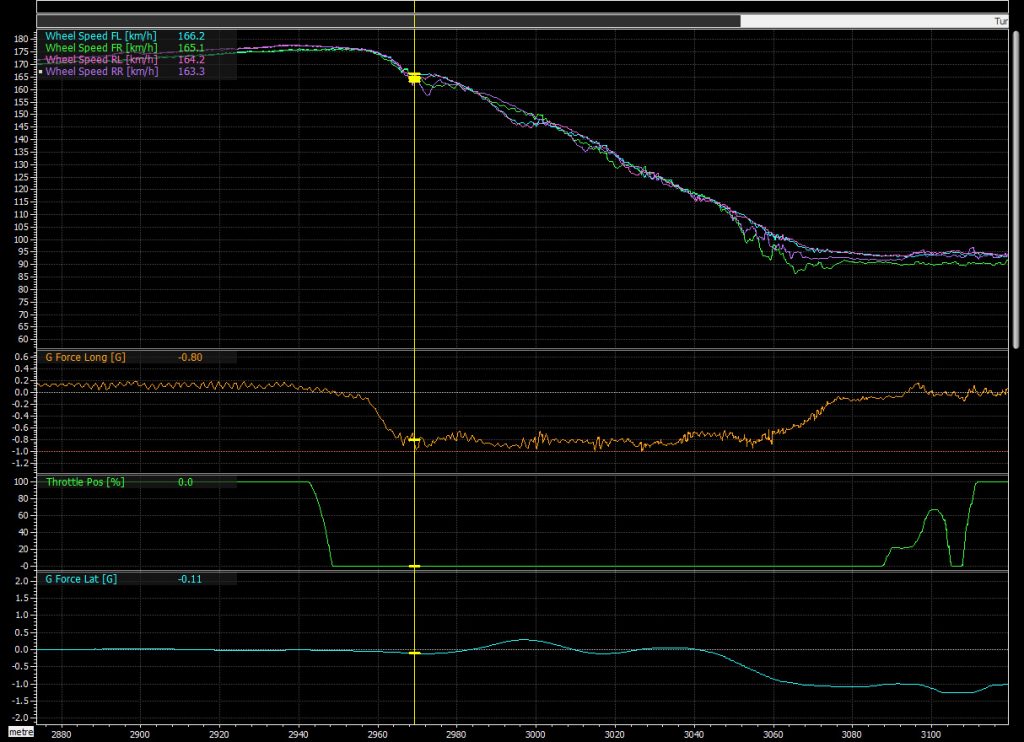 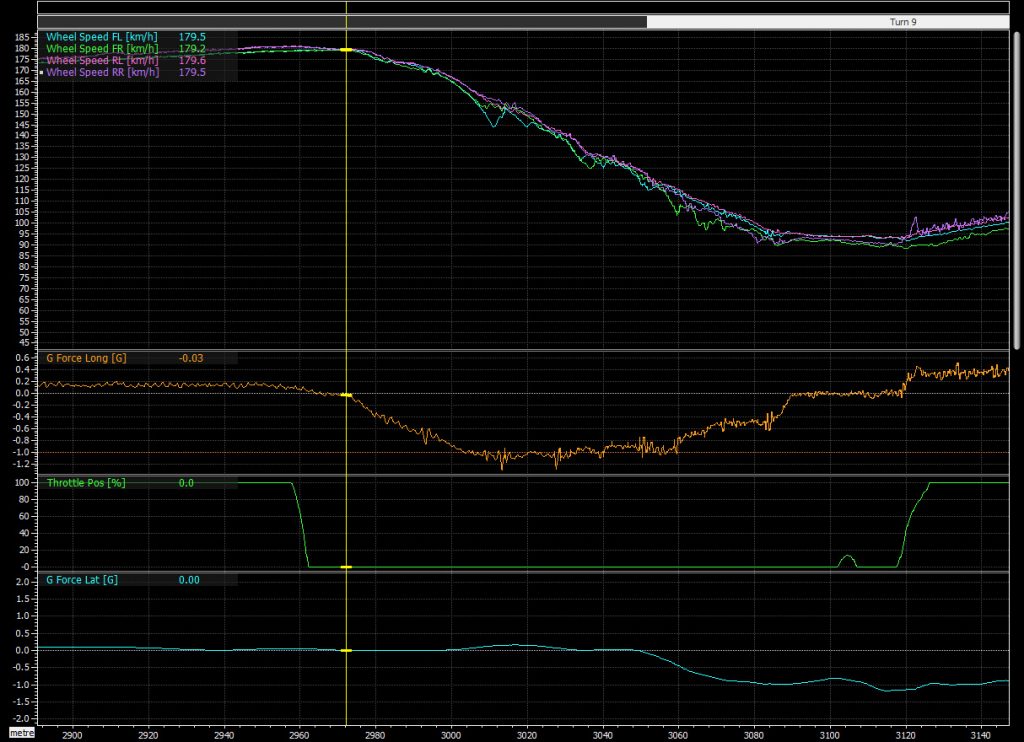 Our brake rotor upgrade was just what we needed. We were concerned about excessive front brake bias, but the car actually had a decent amount of rear bias to begin with. With the bigger disc the brakes never overheated, and the pedal feel remained totally consistent from the start of the session to the end. I would compare it to what you’d expect of a Porsche on track. Great feel, modulation and confidence that the brakes would always be there when you need them. 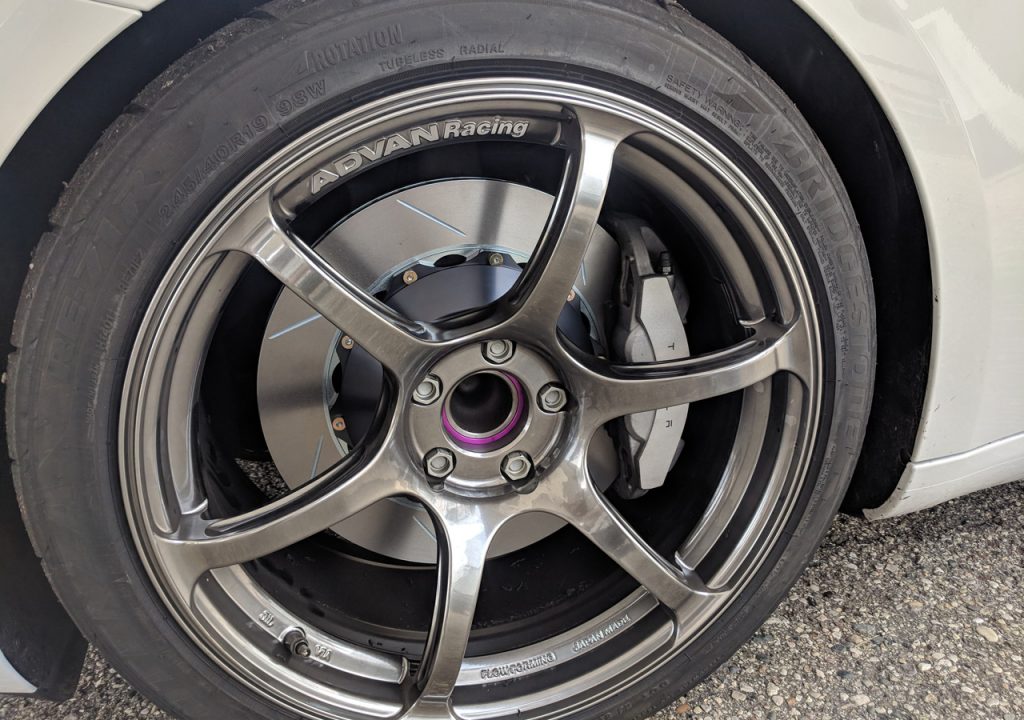 It’s too bad that our Model 3 was up against some heavy competition in street class, in the form of a C6 Corvette Z06! There were also some other very quick cars. It was a very competitive class! With it being Sasha’s first time at the track, and the first time using these tires, we were within 3 seconds of a seasoned driver in a Z06 Vette! I think that speaks volumes for the capability and potential of the Model 3.

Will from PZTuning then took the Model 3 for a run in competition as he was not going to run his car. For those of you that may not know who Will is, he currently has the fastest Time Attack car in North America. It is about as fast as a GTE car – the fastest factory built production car based racecars in the world! Will loved the car – from the balance to the brakes, he found it to be an extremely enjoyable sports sedan. Although he did struggle with the lack of noise a little bit 🙂 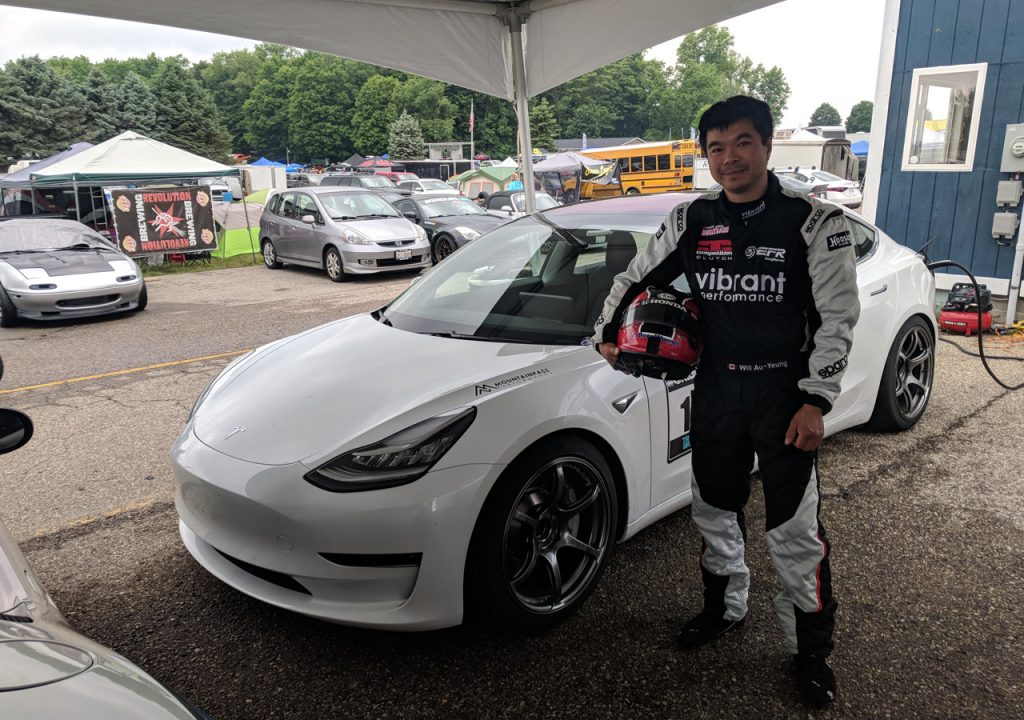 Just before that we had Chris Forsberg, a championship winning Formula Drift driver, take Blue Lightning around for a few laps while we chased him in the Model 3. Chris among others in Formula D are considering electric power for their drift cars, and I think Chris very much enjoyed the electric car experience – although he also wanted to hear some noise! Thanks Chris for giving us your thoughts on Blue Lightning! 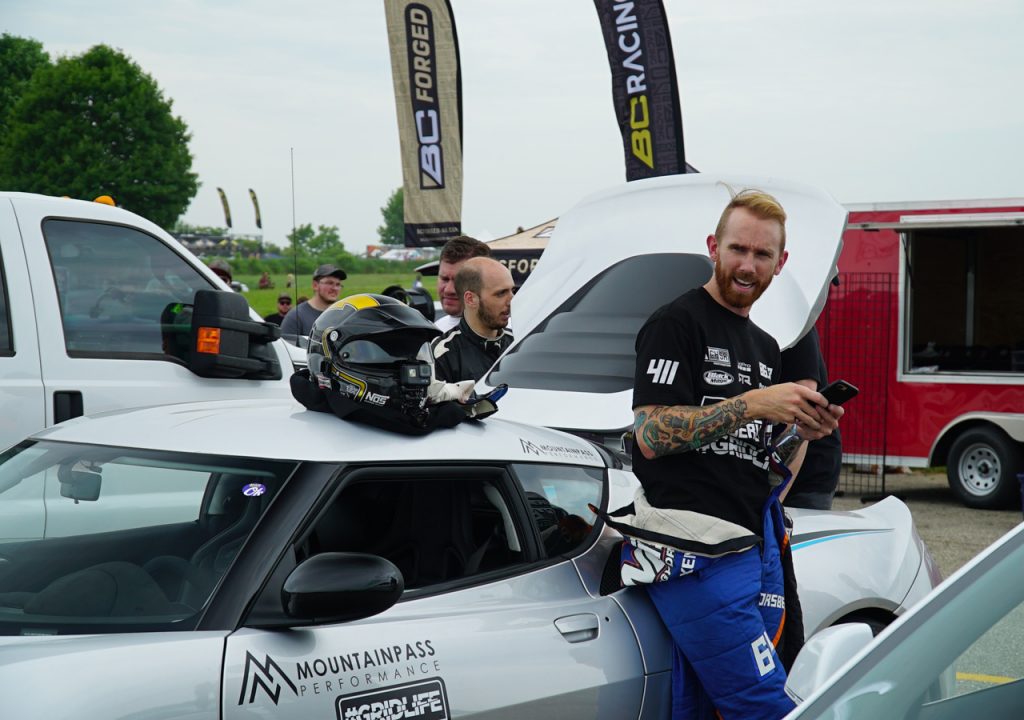 The event was a great success for us and really helped to raise some eyebrows about the capability of electric cars. The majority of those at GridLife are gasoline engine enthusiasts, but everyone loved seeing these two EVs on track. Many of the fans had never seen a Model 3 before, yet here was a modified one racing on the track right in front of them! Countless people repeated the same phrase to us: “It’s the future, man!” – to which we smiled and pointed at our “The Future” t-shirts =)