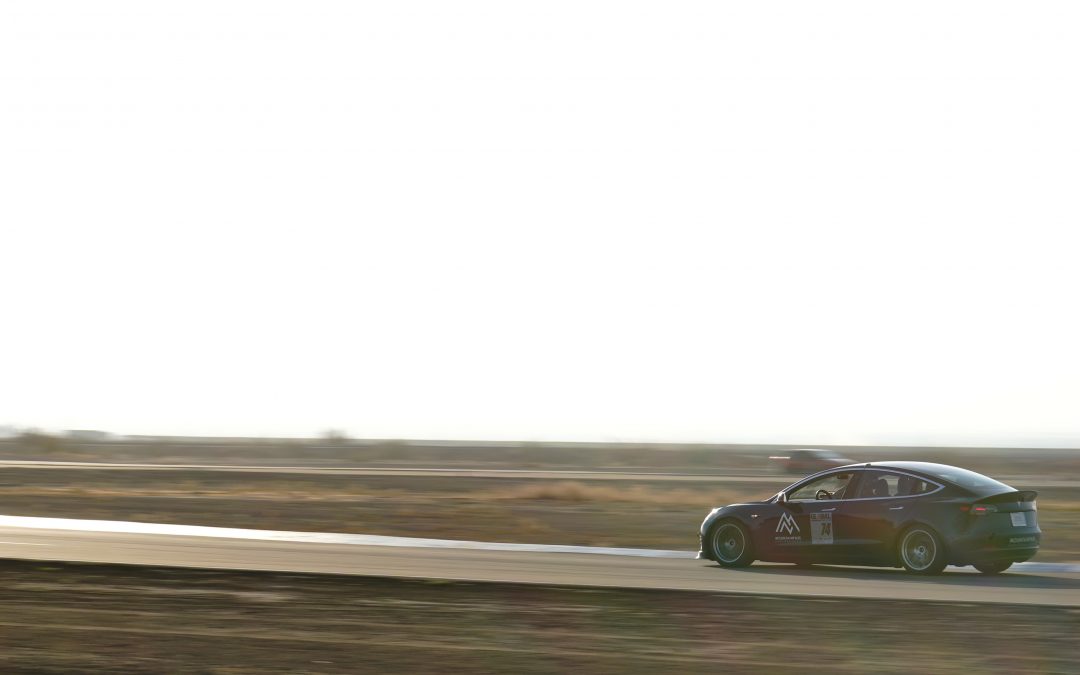 Wow. What a wild last two weeks we’ve had. It all started with an invitation by our customer and longtime racer Cameron Rogers to bring his Tesla Model 3 to the largest Time Attack event in North America – Global Time Attack Super Lap. The event is in Tesla’s own backyard, and brings out the fastest cars from all over the country (and Canada! – in fact the overall record holder is sponsored by our sister company OnPoint Dyno) – so this was really the perfect event to attend for many reasons. One, to get local Tesla folks interested in what we’re doing, and two, to show up at the biggest event in the country with the goal of winning our class with no prior experience at this track. I think it’s safe to say some were surprised. So let’s get into the story.

First of all, let me give you an idea of the competition. The Performance Model 3 falls into the Enthusiast AWD category – which despite being called “Enthusiast” is actually a very challenging class with very funny rules. You’re basically allowed to have as much power as you want as long as you run on gasoline fuel, you’re allowed to have a big wing and splitter, but must run on street tires. That makes the class tricky for us as we weren’t about to bolt a massive wing onto Cameron’s car, nor did we have any way to increase power from stock. Our competition had upwards of 500hp in cars weighing around 1000lbs less than the Model 3. 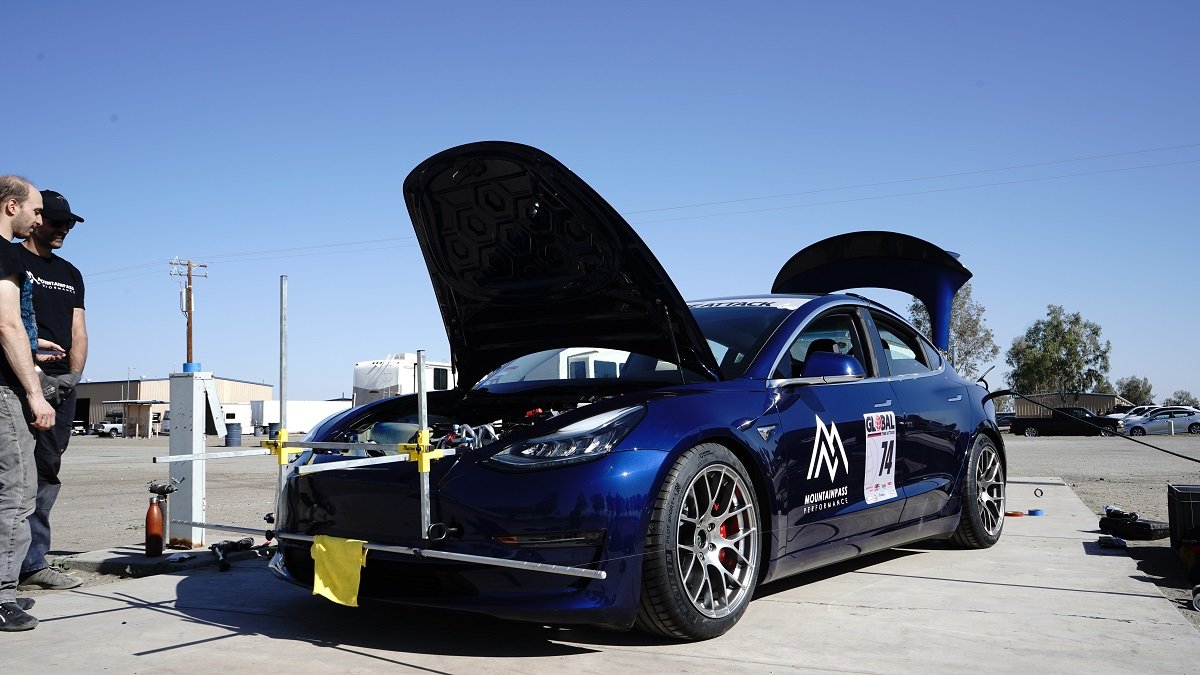 Now, let me tell you about the track. Buttonwillow is a very high-speed track with sustained high-speed corners. Remember that big wing I said we weren’t going to put on the car? Yeah, well it does a lot at a big fast track like this. In fact, that’s one reason why Buttonwillow is used for Global Time Attack – because it encourages people to build cars with massive amounts of downforce. It also means it’s not ideally suited for a single-speed Tesla Model 3, which as well all know is designed for 0-60mph acceleration. The point I’m trying to make here is that if the car can be competitive here, it would only do even better at smaller, shorter tracks.

The current lap record was set back when the class allowed semi-racing tires, so we knew it was unlikely that the Model 3 would be able to break that record – but we did want to be the fastest car to have ever run the class since street tires were mandated. To do that, we knew we needed to make some performance upgrades to the car. 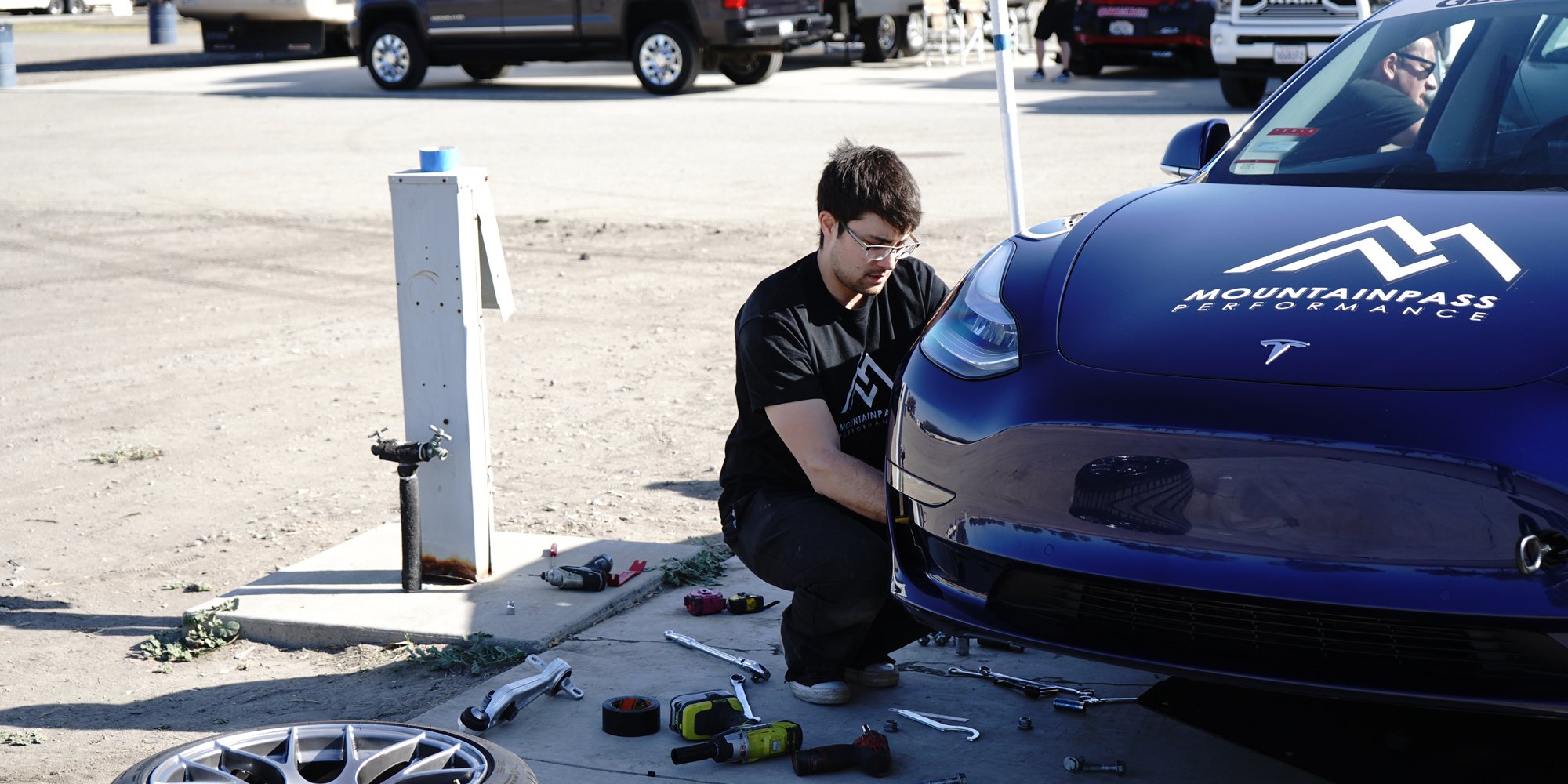 Cameron already has 18×9.5″ wheels, so he got some 255mm wide Michelin PS4S tires (the maximum width allowed by the rules), and shaved the rear caliper of his Performance Model 3 to fit the 18s. We then worked really hard to prepare our AWD coilovers in time for the event – in fact, we got the prototypes done not even a week before the event. We also mailed Cameron our stainless steel brake lines, suspension arms, and prototype stability control defeat device and Motec datalogger.

We arrived at Cameron’s house jet-lagged, tired and furious to find out Air Canada had not loaded our checked luggage on the plane. That’s right. No front coilovers. No Motec logger. Panicked and unsure if Air Canada would come through, we came up with a backup plan to at least get the front suspension down to match our rear sports coilovers. We drove the car to Buttonwillow the night before the event without anything – awake at this point now – hoping Air Canada would come through for us and our friend would be able to bring everything down in the morning. 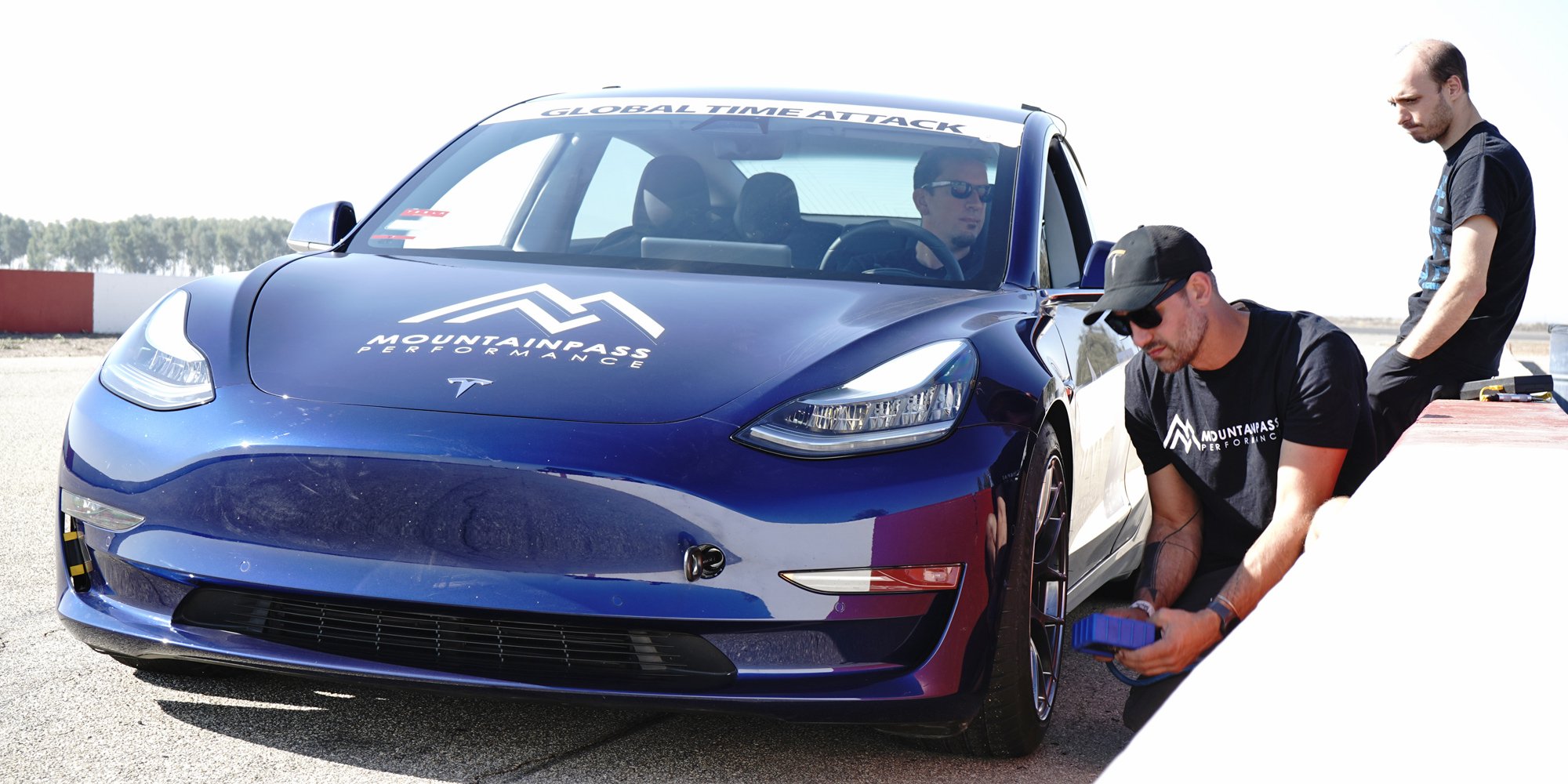 To our amazement, the bags did come on the next flight, and after arriving at 2:30am (we were awake for almost 24 hours at that point), we woke up at 5:30 and headed to the track where we needed to install the front AWD coilovers, do some last minute prep and perform a track-side string alignment. Everything went to plan, and we got out for the 8:30am practice session.

A little bonus for our troubles? TRACK MODE. Yes, that’s right. Track mode was pushed to the car and we were able to benefit from massive improvements to track-specific driving. It felt surreal that – as a total fluke – Track Mode was released the day we needed it most. Suddenly, a car that would overheat in one lap could go 6. Stability control that was totally impossible to drive through was no longer a hindrance, and active cooling while charging to make sure the car was always at the optimal temperature for the next session. The most impressive thing to me, personally, about track mode (when I compare it to a car with just our stability defeat) – is the fact that the car can be heat soaked and starting to limit power, and after just one lap at 50% the vehicle will be totally cooled down and ready to put in more laps. 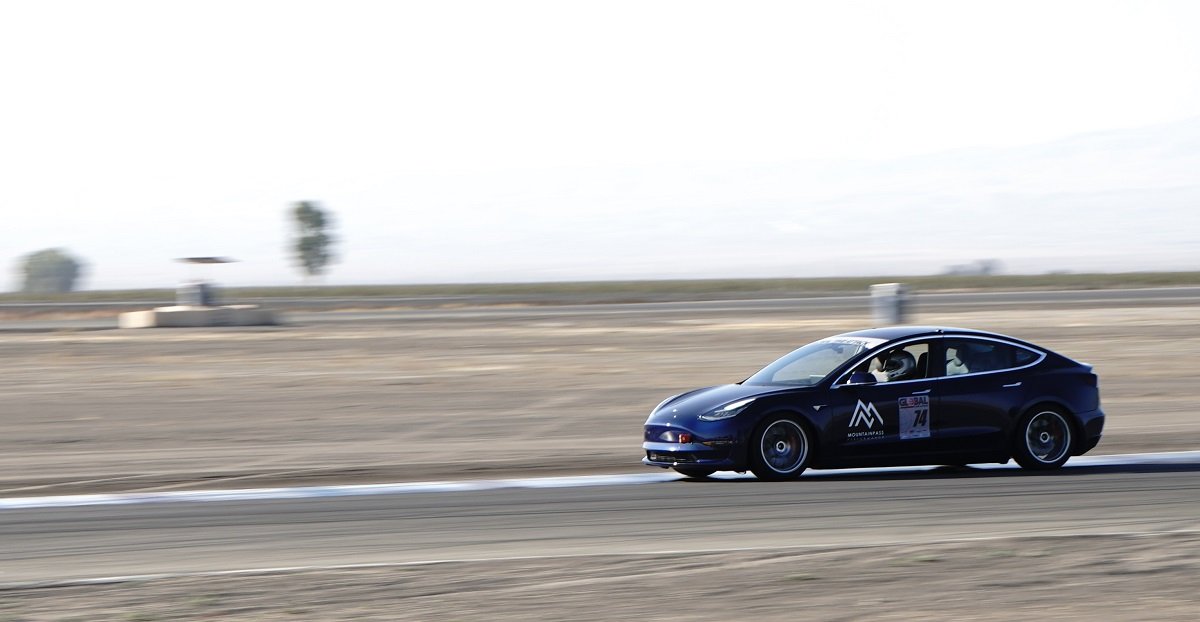 The degradation in performance with SOC was very manageable, on the order of around 3-4km/h of loss in long straightaways, or about 0.4-0.5 seconds per lap. Certainly not the 2-3 seconds+ that many said would be the best that an EV could achieve.

Right out of the box the car was great. But we could make it better. There was significant effort put into the dampers and controlling some very aggressive bumps and compressions in the track at Buttonwillow that most tracks simply do not have. After a few more string alignments testing different alignments, we were very happy with the balance of the car. Cameron literally called us from his Bluetooth on his cooldown lap on his first session with the car and sounded like a kid at Christmas. I think he liked it! I was just worried something was wrong as it’s not very often I get a phone call from someone who’s racing on track! 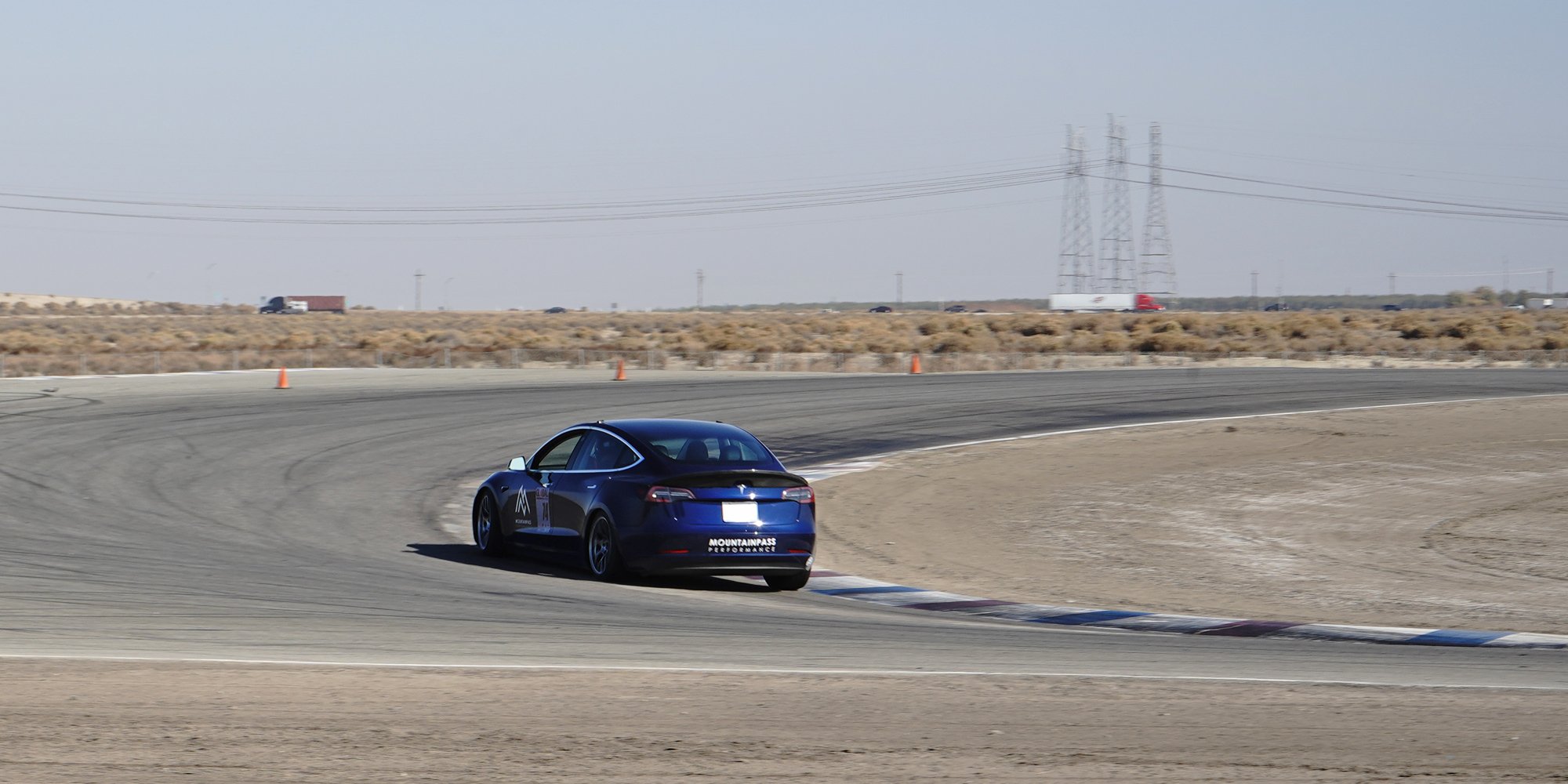 The main area for improvement we wanted to look at was aero instability. The car felt a little bit nervous at high speed when really attacking corners, so we really needed something to cut rear lift from the back of the Model 3. Luckily Cameron had reached out to a carbon fiber shop prior to the event and encouraged him to consider making some Tesla Model 3 parts. And make them he did. A large rear spoiler and a front splitter. Now personally I can’t tell if they work better than they look, or look better than they work – but we loved them. The first part we put on the car was the rear spoiler, and instantly the high-speed instability was gone as expected. 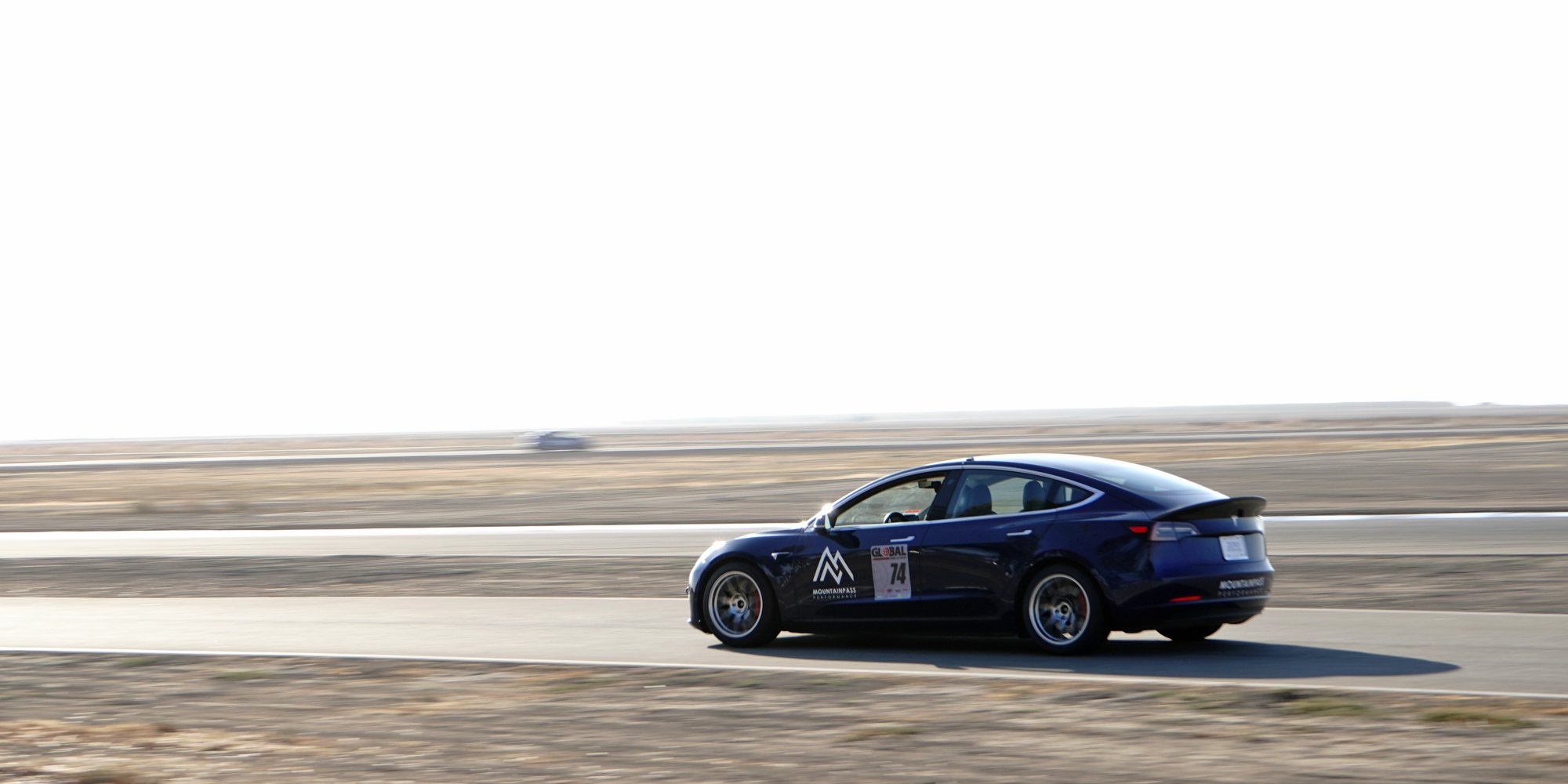 We didn’t end up putting the front splitter until the end of the last day, as I was nervous about ripping it off if I went off the track. That was silly. It proved to be worth 4-5 km/h more mid-corner speed in Riverside – a fast 150km/h (93mph) corner! We hope to work with this company to offer these functional aero components. We love them!

In the end with the combination of our suspension components, brake lines with racing fluid, the wheels and tires, and the aero bits – we were left with an extremely well setup sports sedan faster than anything else in its class. And that is with both Cameron and I having each only about 6 laps in this car on this track. I have no doubt if either of us spent more time learning and improving we would be able to get into the 57s!

The fastest our competition went was a 1:59.18, and we narrowly beat him out with a 1:59.12. Until… we didn’t. He ended up protested us – finding a loophole in the rules claiming that Electricity is not an “approved fuel”! The series literally DQd us on the podium and took away our trophy! Here is the exact excerpt from the rulebook:

2. Only unleaded gasoline or Diesel may be used as fuel. No Ethanol, E-85, leaded, methanol or exotic fuels allowed as the primary fuel. Water/Methanol injection is allowed in a maximum of 50% methanol mix.”

7. Hybrid drive is allowed only in full OEM form with no modifications to the drive, control or battery systems. “

We found it hilarious that we were being protested with what is a total daily driver that we just threw some parts on for this one event. The guys that protested us have been racing at this track and been working on their cars for years. We didn’t get too upset or make a big stink of it, because the protest is actually more of a compliment than anything else. Cameron confronted the guy after and asked why he protested – and his response was that “we were making him nervous.” Sound familiar? So this is now the third event where we’ve raced and won with EVs where we have been protested. We love it.

Cameron was then interviewed by Matt Farah of “The Smoking Tire” – where he tried to convince Matt to take the Model 3 for a drive, but I think we have some more work to do to convince him to see just how impressive electric cars are. You can check out that interview here:

Finally, here is our event video with a ton of footage of the event and our thoughts as they happened. Both Jesse and I want to say thank you to Cameron for inviting us out and giving us the opportunity to show what our parts can help do for a Performance Model 3 on track. We had a great time and were extremely impressed by Cameron’s driving. More of this to come in the future, no doubt. In the meantime, share this video and enjoy the silliness of being disqualified for not consuming any fuel! Enjoy!