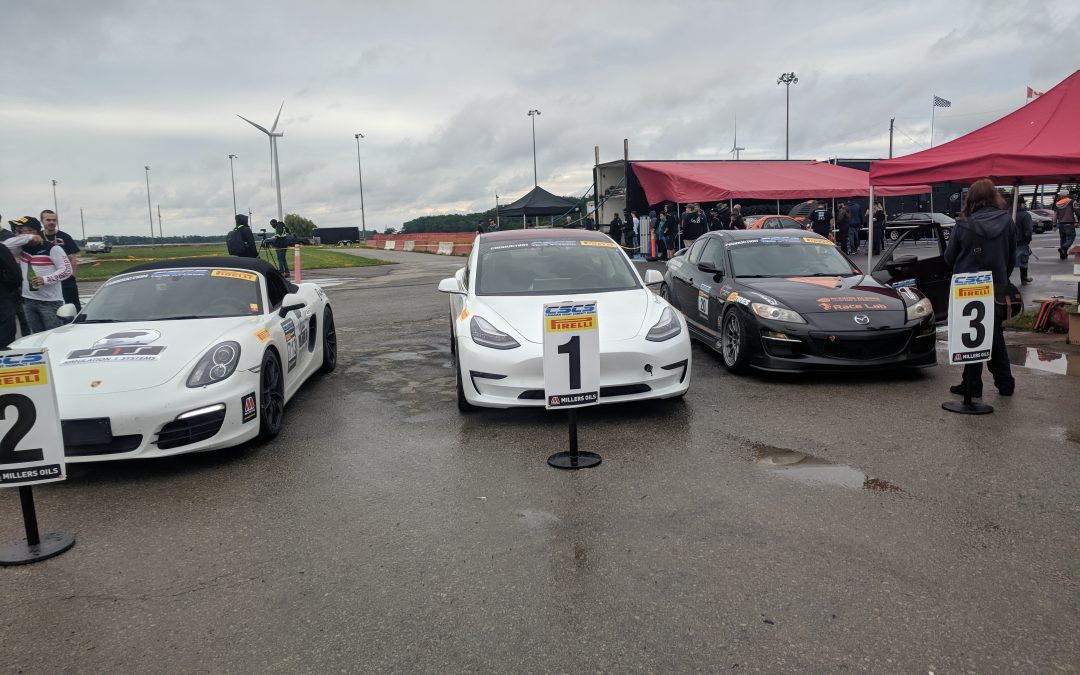 I’m so pumped to tell you all that our Model 3 (nicknamed “The Future”) brought home a win in some wet conditions at CSCS Time Attack recently. Arriving at the track on our 18″ aero wheels, we got there with a ridiculous efficiency of around 135wh/km, and with a quick stop at a Supercharger just to make sure we arrived at the track with the battery as full as possible, I think we ended up arriving with almost 80% SOC. The track (Toronto Motorsports Park) has a 40A J1772 charger, so we were able to charge at 10kW throughout the day, which was super convenient for us, and battery charge was never a concern all day despite running almost all of the sessions in their entirety. 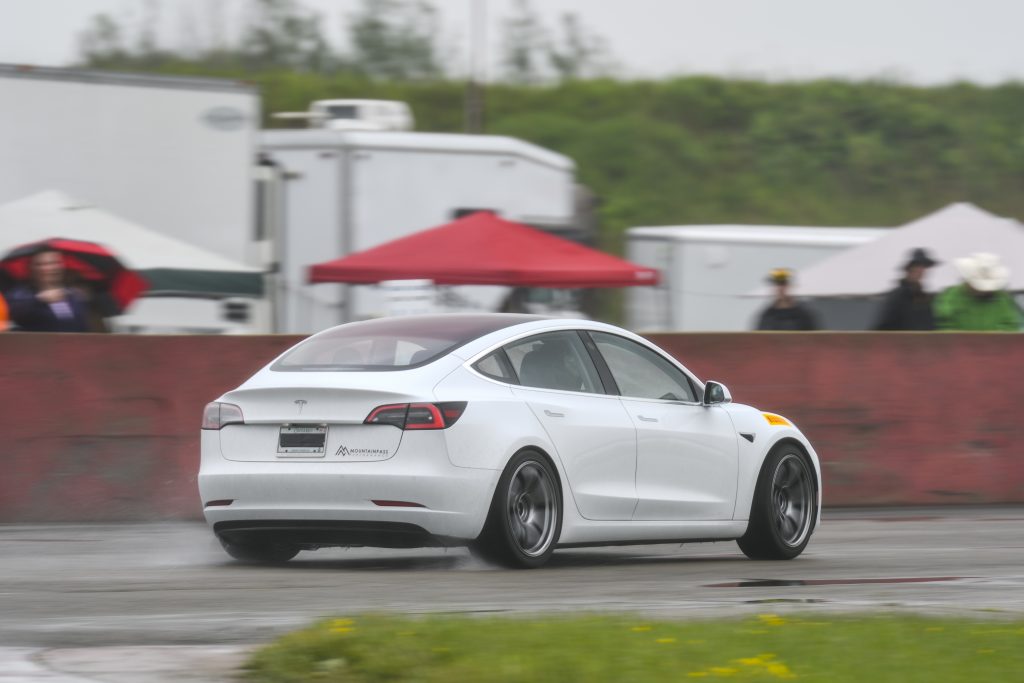 We slapped on the 19″ Advan’s and the big brake kit (as unfortunately it doesn’t fit with the 18’s) and applied the series decals and hit the track. The car had great balance and was extremely fun in the wet. The lack of outright straight-line speed is forgotten and its just all work finding where the track is hiding grip and trying to grab it all up without flying off the track. It’s extra tricky when you can produce upwards of 0.8G’s in braking but only around 0.5G’s in the middle of a corner! Come in too hot and sail right off the other end… 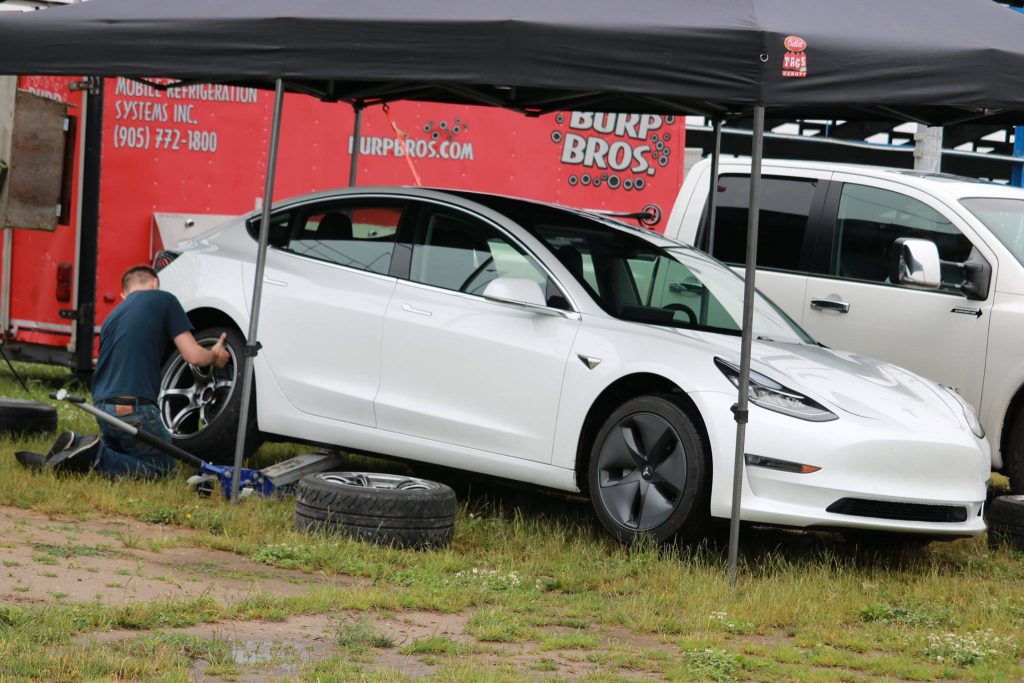 We just wish the charging cable reached onto the asphalt. Working in the mud is not so fun!
Photo Credit: Clipping Point Media

After our first session we were 5th overall on the leader-board, as the wet conditions were favorable to a lower power/weight road car. The track would continue to get even wetter throughout the day, so it was impossible for anyone to improve the early qualifying times that were set in the morning. That resulted in our little street-car Model 3 staying near the top of the standings throughout the day, which was pretty fun. 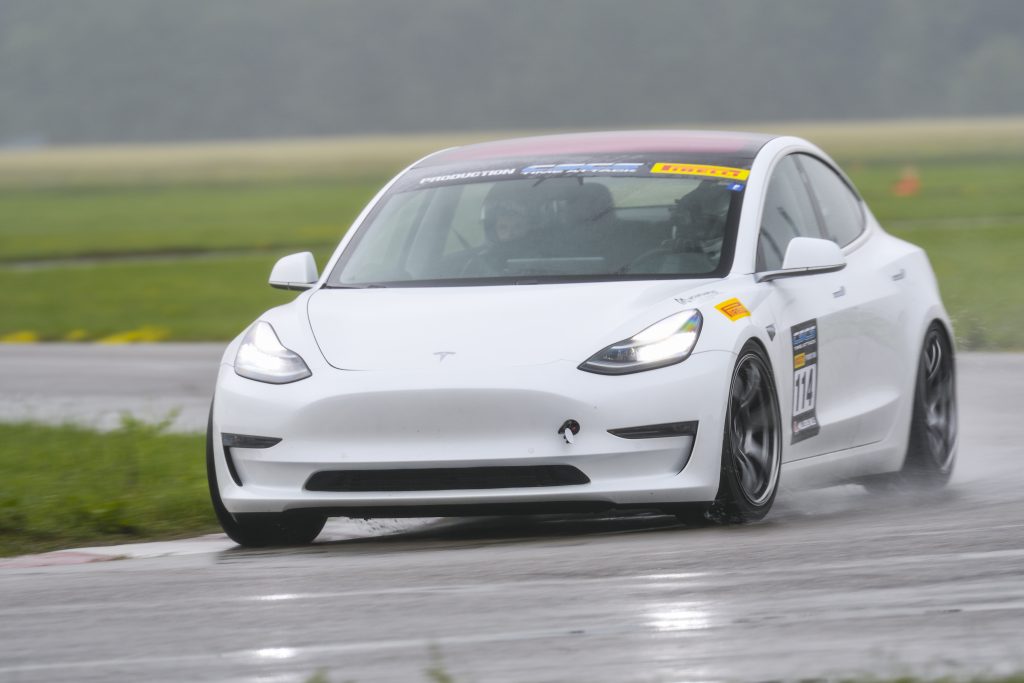 My favorite photo from the event by far. Thanks to Jay Lai for this awesome photo.

The balance of the car in the rain was what I would consider as good as you can ask for. TMP is known for having basically zero grip in the rain, yet the car was easy to dance around at the limit, and with the stability control disabled we still had traction control that was not overly intrusive, and ABS that worked very well, but no limit on the amount of sideways fun I could have with the car (assuming it was not induced with power, due to the traction control obviously). 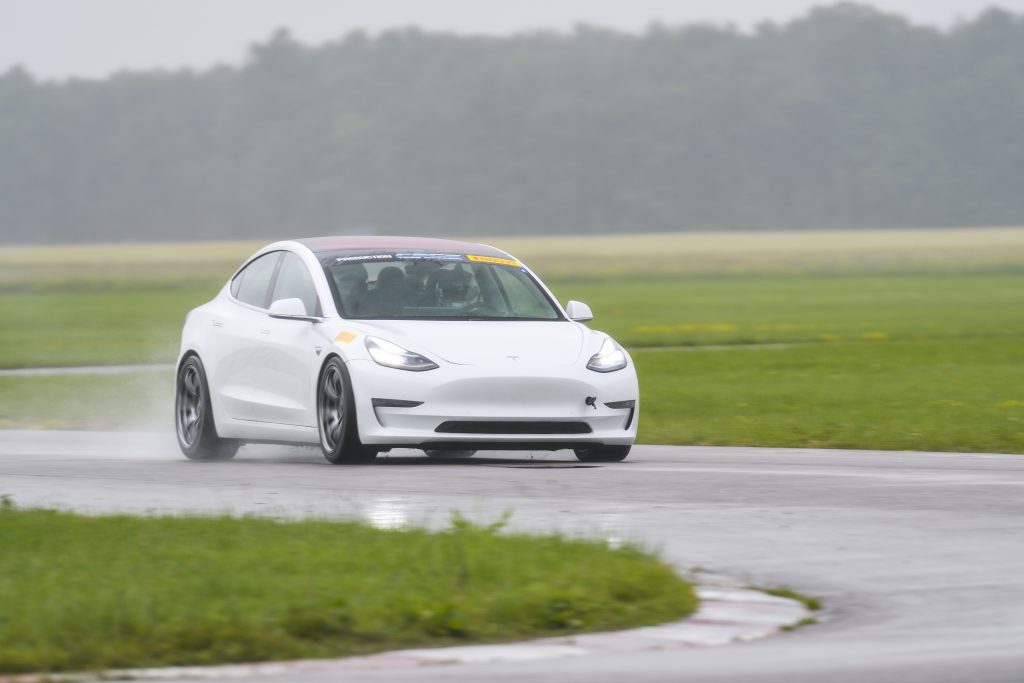 When it came time for the actual Time Attack event the track was starting to get a few dry patches, so we ended up posting some ridiculously fast times overall, but to be fair that wasn’t a true indication of the car’s speed relative to the others as we had a much better track. That was confirmed when the last session went out 10 minutes later when the track had almost fully dried. Either way the car was the fastest in its class and also the fastest RWD car at the event. We were about 3.5 seconds faster than the next cars in our class, which were on track at the same time.

Our result was enough to even get the attention of Elon, who re-tweeted Teslarati’s article about our win. Needless to say we are humbled and honored that he even knows what we are up to!

Here is the article from Teslarati that was re-tweeted:

And here is the YouTube video contained in that article of our in-car lap (it’s worth mentioning that the music is just from In-Car. We were blasting 80’s hits all day while on track. Because when you have no sound, why not?):

And finally, here is Edmund being silly talking about our Model 3 success that originally was part of the Teslarati video:

Hope you enjoyed this article! Please subscribe to us on YouTube, and follow us on Intstagram (Mountainpassperformance) if you’re not already, as the updates come much quickly through those channels.

A quick update on the parts front: Our sports coilovers are in the final stages of production and should be shipping very soon, our big brake kit is complete and ready to ship out (that’s my favorite part so far to be honest as it makes the car actually work on track), and our new DNBK t-shirts have arrived!

We are also working on a module to set the stability control system into a fault condition for the racetrack, so that those wanting to go have some fun on the track can do. Our rear toe arms are currently on back-order (we didn’t think we’d be selling so many!) but we are back in stock on the rear upper control arms.

Thank you everyone for your support! Keep showing what EVs are capable of, remember the goal is to leave no reason for anyone to choose an ICE vehicle on their next vehicle purchase. We’re doing it the only way we know how – racing.