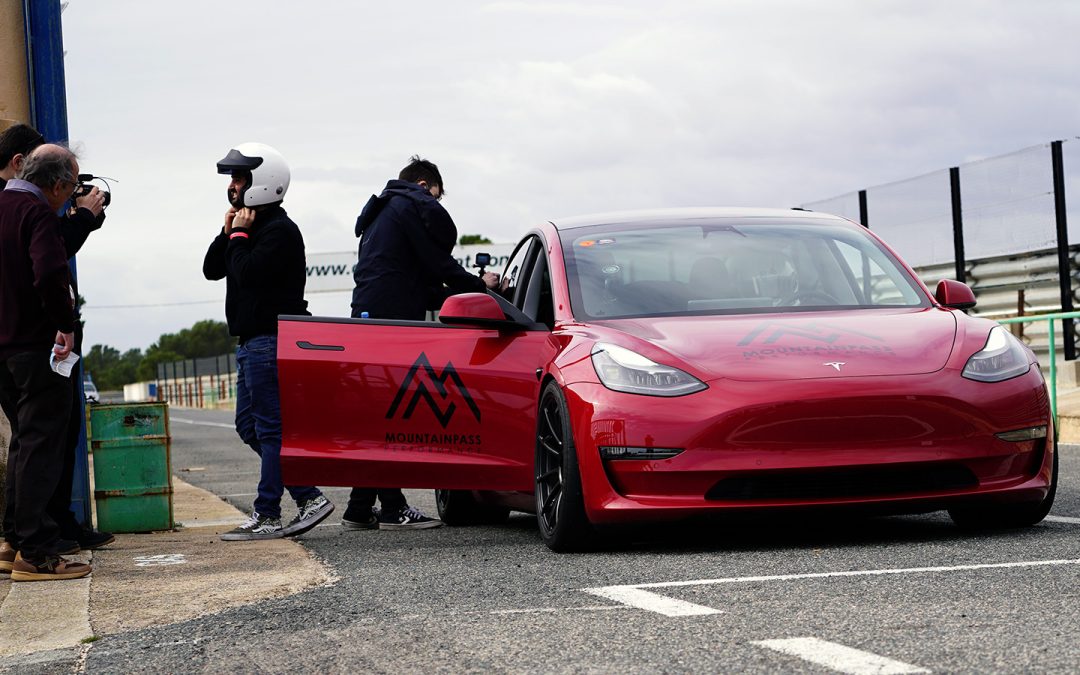 Hello everyone! We have a little quick pre-spring update for you. Things have been busy at MPP as usual, and if you’ve been following along on social media you’ll know what we’ve been up to. But for those of you who do a good job of avoiding social media (good for you!!!), here are some updates on what’s been going on during our long winter.

For the first time in as long as I can remember, we haven’t seen the grass since December. We’ve had more snow this year than I can remember, so it’s meant that if we wanted to do any kind of on-track testing we would need to… leave.

So, we went to Spain and bought a car there.

We had the car delivered to us at the airport by an amazing used car salesman Joan. He’s the opposite of the typical used car salesman stereotype, and Joan was so kind to even allow us to ship him some car seats which he installed in the car before we arrived!

Over the course of two days, we equipped the car with the entire catalog of MPP parts, including our Party Box and MoTeC C125. The only items the car doesn’t have are our oil cooler, spring arms, and a cooling party controller. And that’s simply because we didn’t have enough time, and we wanted to try the car with the standard spring rates on the Spanish roads.

We found that the main roads are incredibly smooth and are just fine with high spring rates, but the smaller streets often have broken roads and softer springs would be desirable there. On average though, the quality of the roads in Europe that I’ve experienced so far (Spain, France, and Germany) are night and day compared to those in North America (specifically areas with winter frost).

Jesse’s job was to drive our support van, which we filled to the brim with bins of spare parts, jacks, tools and our track wheels and tires. It was quite the nomadic experience having everything out of the back of the van, but it taught us some important lessons about how to better organize for track days back home when we can’t bring our trailer.

We rented a track called Calafat in Spain to spend the day finalizing a significant update for our Party Box – something that we’ve spent most of the winter working on. The track is quite incredible as it has a number of high power three-phase connection points that can be used for charging EVs, and it also has a Tesla Supercharger only 25 minutes in either direction of the track. Maybe we’ll host some lapping days there in the future for Tesla owners in Europe that want to escape the cold winter?!

Everyone was incredibly kind. The circuit offered to flat-tow charge our Model 3 countless times, and I was worried the poor SUV was going to blow up lugging the 60+kW of regen around the circuit lap after lap. But thanks to that we were able to do far more running. The circuit itself is awesome – every aspect of the track was technical. The braking zones consisted of kinks and chicanes, and many corners led into each other, so there was a ton of time to be gained by thinking through the line and the approach.

The curbing, or piano as it is called there, is relatively flat with some painted concrete beyond the curbing. That means I was able to engage in my favorite past time of straddling curbing, and I have to say it was awesome.

One aspect that I am particularly proud of is how close our simulation Model 3 in Assetto Corsa was versus reality. The best lap time I achieved in AC was a 1:35.4, and at the track, I did a 1:35.5. The data overlay is almost identical – the straightaways are perfect, and most corners are within a few km/h. The main differences are actually from driving timidly into risky corners, which indicate an opportunity of a few tenths.

Two days later we returned to the track for a Trackrat Club lapping day – where we had arranged with the organizer Eliseo to take their drivers for rides. I think it’s safe to say that everyone was impressed with the Model 3 and generally loved it! The reactions were entertaining and you’ll have to watch them towards the end of the video.

After the big push, we managed to relax for a few days before heading back to the snow, where we had an exciting surprise.

The front splitter/diffuser that I designed for the Model S Plaid was complete and ready for test fitting. Thankfully – it fit perfectly! Alex at Spage did a great job on this splitter and it is quite honestly a structural element as much as it is a downforce element. It’s incredibly stiff and strong. The idea was to create a true motorsport part with no compromises in terms of build quality, which also fit all of the factory mounting points and looks at home on an aggressive road car.

I personally feel like we hit the nail on the head on this one, and it is one of the bits I am most proud of that we’ve developed. As this is a true, no compromises full-motorsport component, it is expensive. If you’re used to $100 eBay front lips you don’t even want to think about what this costs. But if you understand what real motorsport composites cost and you’re interested in one, feel free to shoot us an email. I’m not sure if this will be a production part or an off-menu type thing that we build to order.

We’ve released a larger brake kit for the Model S which you may have seen already, this uses a 400mm rotor and the OEM caliper, as well as upgraded 2 piece rotors for the rear. Using infrared multi-channel temperature sensors we can monitor and even display the brake temperatures on the Model S’s suspension screen (thanks to the emulation we’re doing with the MoTeC air suspension delete).

This was extremely useful during testing to see how the brakes were handling the massive amount of heat the combination of 1000+ horsepower and almost no drag. The sensors remain on the car and we are looking to go testing at the racetrack this week with the car.

Thanks to Ryan Huber we now have a Model 3 steering wheel on the Plaid as well, which means no more terrible yoke! I forgot how terrible the yoke was while in Spain and I must say I’m incredibly happy to see it off the car.

Other updates to the car include our Model S master cylinder brace, as well as prototype rear toe and camber arms, and a rear wing which we are currently in the process of mounting. Hopefully, we’ll get it on before we go to the track this week (fingers crossed! – we’re waiting on a hatch arriving from a shipping company)

Our Model 3 Anti-Roll Bars (sway bars) are now finally available! It took a bit but they are here, and they perfectly complement our Model 3 sport and supersport suspension. The feedback we’ve received so far has matched our testing conclusions, so that was really encouraging to see and we couldn’t be happier.

The initial kits shipped directly from Eibach, and the rest are currently in-transit to us and will be shipping once we receive them.

And finally, congrats to Chris for finally getting Tesla to come out and install the solar panels on his roof! We’ll plan to do another solar sponsorship in the coming months and hope that if you’re interested you take the time to apply!

We also have another announcement coming in the next week on how we plan to help support those in Ukraine who are suffering from the horrible invasion, with some specially colored MPP parts. Our hearts go out to those that had their lives ripped apart by this pointless, needless war.

MPP will be closed Monday May 23rd for Victoria Day Holiday (In Canada). Thank you! Dismiss