MPP Visits Laguna Seca and Has a Record-Setting Party 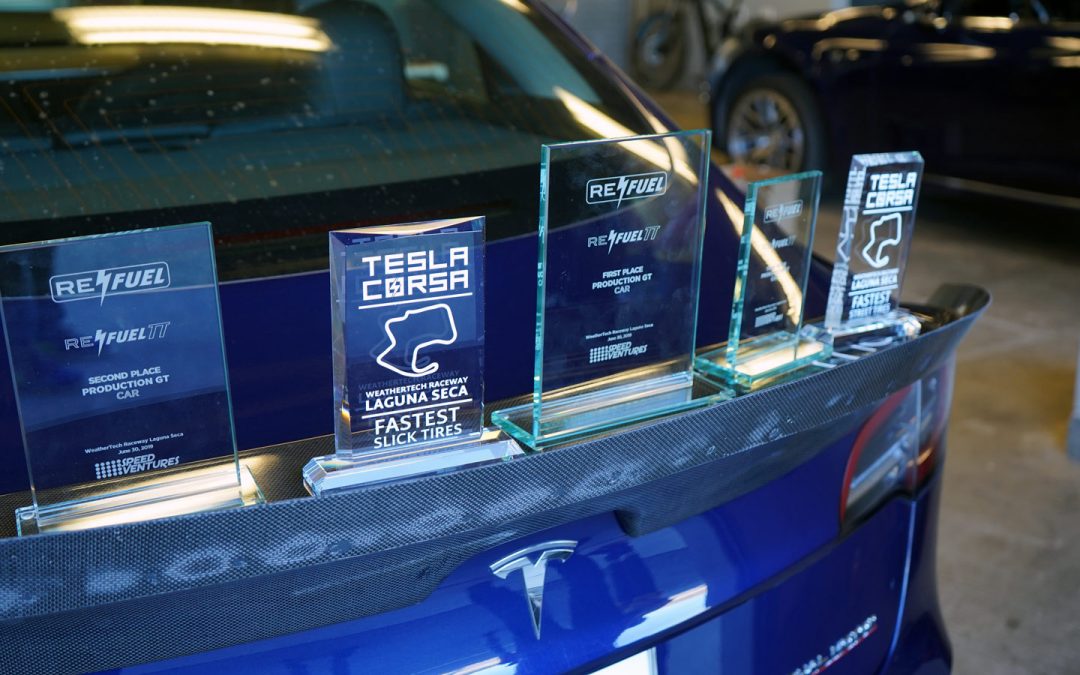 Cameron Rogers, owner of the blue Tesla Model 3 Performance that we raced at Buttonwillow for Global Time Attack, invited us back to sunny California for Tesla Corsa and the 11th annual Refuel event.

Excited for this new event, we wanted to do our best to prepare some new parts to give us the best possible chance at setting a new lap record at Laguna Seca. We had already been working on some adjustable front upper control arms, so we pushed the prototype through as fast as possible to get them in time. We received the arms just 3 days before we left, installed them on our car for a quick check and then removed them and packed up our suitcase!

Along with the front upper control arms, we also have been quietly working on a MoTeC digital dash and datalogger. We thought this event would be the perfect time to debut it. We’ll have a dedicated product page for the dash soon, but know that it’s one fine piece of kit that is perfectly complemented by the total lack of an instrument cluster in the Model 3.

Upon arriving in San Fransico we met up with Cameron and picked up his car, and headed straight for Monterrey. An incredible shop by the name of Revival Road Co. allowed us to use their space to work on the car. Thank you guys!!

One of the major changes we would make to the car for this event was to attempt to fit some very large Porsche GT3 Cup Michelin racing tires. The wheels we picked were rather wide (18×10.5), and the tires even wider than the wheels! It was a ton of work but Jesse got in there and got the job done. In the end, we were able to fit mega-sized racing slicks on the Model 3, and with our front upper control arms we were able to get them to fit – although just barely! The 3.4 degrees of camber would do a good job of utilizing all of that tire too.

We then installed the C125 dash kit and did a quick string alignment on the car and were ready to go racing! After some 3am domestic disturbances at our motel, more jet-lagged than ever we headed off to one of the most scenic racetracks in the world – “insert corporate sponsor here Raceway Laguna Seca”

The first thing we took in was the incredible feeling of being surrounded by other Teslas on the track. It was awe inspiring to have only silent Model 3’s all around us – almost like a wave of the future taking over the racetrack (sorry that was super tacky).

This was Sasha’s first time driving at Laguna Seca, but luckily iRacing has done a great job of laser scanning the track, so the first session out we felt right at home and started to work on setup of the car. What we would do without iRacing I have no idea.

Once we put the slicks on the car was basically on rails, and we just worked on minor setup changes to optimize the car for the track. Unfortunately, what we didn’t know was that the OE lower control arm bolts were slightly losing clamping force and allowing a little bit of movement of the lower control arm, so the car developed a little bit of understeer that got progressively worse each session.

More on that later, but let’s first talk about how cool it feels to drive Laguna Seca at 10/10ths in an electric car on racing slicks. The best thing to compare it to would be a roller coaster – as there is literally no sound and you have 1.4 to as much as 1.8 G’s throwing you around. The banked corners and compressions at Laguna Seca tempt you to push the car harder with every lap, and you’re rewarded with these super sticky Michelins that seem to only get better the hotter they get. The car trail braked into corners exceptionally well, seeming to have almost unlimited grip on the entry – and if you did manage to come in a touch too fast, it required nothing more than a light graze of the brake pedal to bring the nose back in.

Power down was like an arcade game in easy mode. The track mode tuning is setup such that if you turn the wheel more, the car will simply reduce power rather than letting you run wide off track. So it was a balancing game of flooring it – and then trying to open the steering wheel as much as possible to unlock full power.

After a couple sessions we had set a new EV production lap record of 1:37.55. And not to get caught out by semantics – what we mean by that is that there is no current production EV that has gone faster than this around Laguna Seca – modified or not. It seems the internet has taken great joy in prodding the unimportant details rather than looking at the big picture (mass-production EVs are f***ing fast, fun and clean!)

On our final practice session before the Refuel Time Trial – the one lap we get to post an official time – the lower control arm problem had become significantly worse, but we still hadn’t figured out what was going on. The car had diabolical understeer when turning right, but handled totally normal when turning left.

After inspecting all of the wheels for play and going over our front upper control arm with a fine tooth comb – assuming the problem had to be with our new parts – we couldn’t find anything wrong other than a loosened off jam nut on the tie rod. Hindsight is 20/20, but we should have kept digging to find any other issues – because that wasn’t it! The lower control arm bolts were barely hanging on…

And so, the ReFuel TT started and we had a car that would absolutely not turn right to save its life. While the car would produce at a minimum 1.3G’s of grip turning left, the car would produce only 0.8G’s turning left! The front lower control arm bolts started loosening off completely… and it got worse corner after corner. Thankfully we made it across the finish line and somehow still took 1st place in the ReFuel TT with a 1:40.956, although it hurt pretty hard as this was 4 seconds off of the potential of the car, in the only lap that really mattered all weekend! So we learned something valuable here and we’re going to be making a post about how to torque and inspect these bolts after each lapping day.

So it was a bit of a bittersweet ending to an otherwise perfect weekend. All of you MPP customers and friends that came out to visit us – thank you.

It was incredible to see our customers on track flying out there – consistently in the top 3 and pretty much all at the pointy end of the field. Congrats to Craig for being right there in 2nd place, in the same blue as Cameron’s car and sporting MPP decals no less! Just behind Craig was Danny in his white Model 3 PUP- with our big brake kit and some almost totally dead RE71R tires. Congrats on filling out the podium guys!

Cameron was driving a P100DL Model S that he outfitted with A7 slicks which looked like a weapon in the straightaways. Thankfully he was able to get into his car for one session (after we fixed the lower control arm issue) on the Michelin tires and he was all smiles when he came out. I wish we had a recorder on him, but he was ecstatic on how fun and high grip the car was with the new parts and the slicks. I believe he said something along the lines of it being the best feeling car he has driven on track, regardless of being a racecar or not. So that was pretty cool to hear considering this is his street car on streetcar suspension! Thank you, Cameron, for your support and trusting us with your car!

We loved hanging out with you all and thank you for your ongoing support and for your help at the track. We borrowed something like 3 jacks so that we could quickly install and remove tire warmers, and a number of other tools that we simply couldn’t fit in the suitcase with us! The feeling at the event was by far one of the best in as long as I can remember.

Teslarati also supported the event and came out and shot some great footage of the car all around the track. They wrote an article about our adventure which you can read here that talks a little bit about the laptime and what some other comparable (and not so comparable) cars would do around Laguna. You can check it out here: https://www.teslarati.com/tesla-model-3-fastest-lap-record-laguna-seca-video/

Until next time California! It was a blast, thanks for having us! Oh, and thank you to the guys at SpeedVentures for hosting an incredible event. We have to say the thing was timed down to the second, sessions were organized, it was just a really really well run event.