The compression rod is the arm in the front suspension on the Model 3 that controls the forward and rearward movement of the suspension. It’s what holds the wheel in place when you hit large bumps, and what keeps the wheel from moving rearwards when you brake.

The compression arm bolts to the rear of the wheel well, near the driver and passenger’s feet. As a result, this bushing isolates the majority of the NVH (noise, vibration, and harshness) from the front suspension when hitting road imperfections such as potholes, cracks in the road, and broken edges of asphalt. Tesla has designed their bushing with large voids to reduce the NVH as much as possible, but this also creates a very “soft” bushing that has a LOT of travel during aggressive braking specifically. 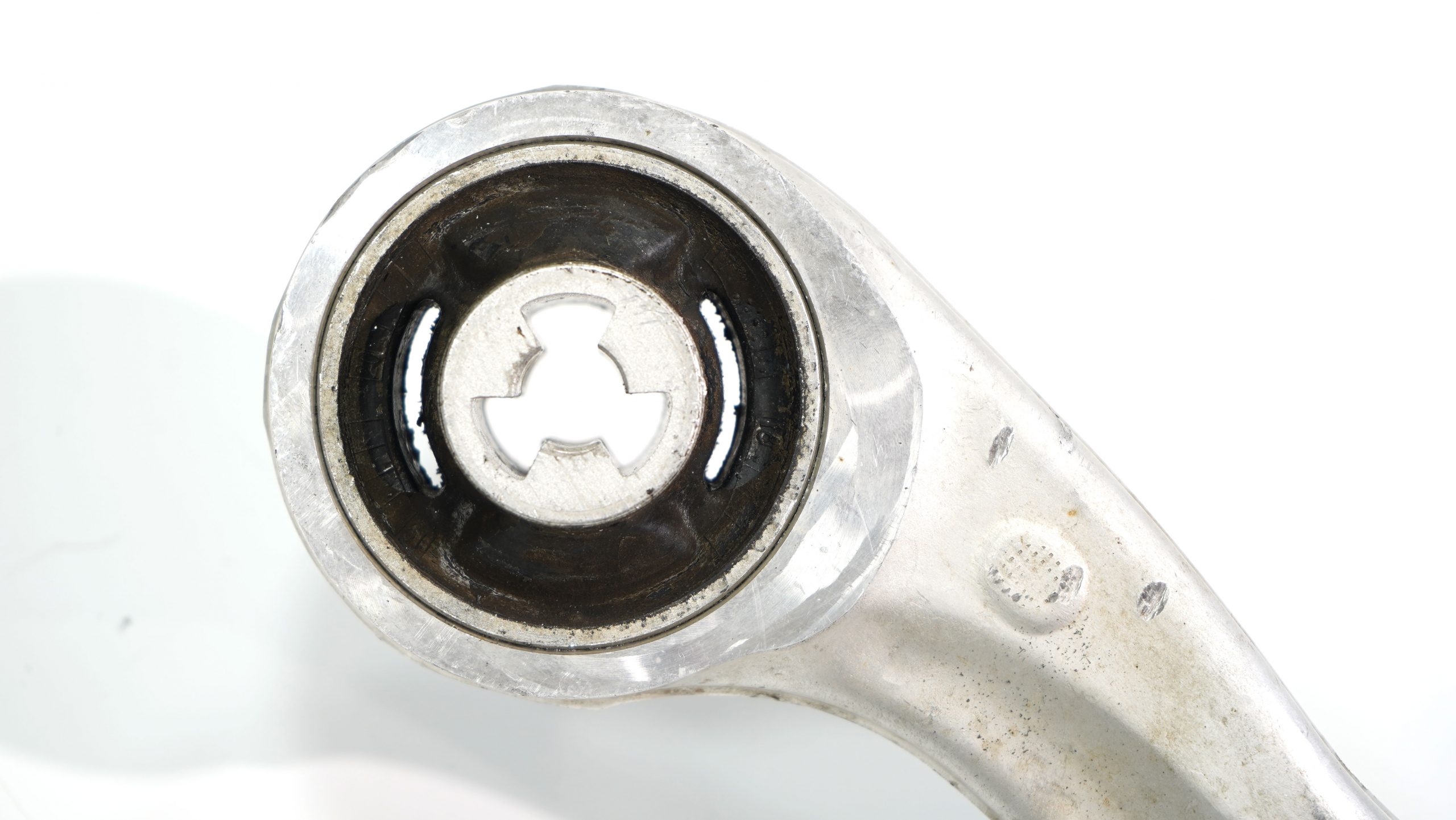 When the compression rod bushing deflects under high load, the result is a change in toe as the entire lower suspension moves rearwards. This causes significant darting and shaking of the steering wheel, especially when the ABS is activated or when only one wheel hits a bump, resulting in an unbalanced amount of distortion in the left and right bushings – causing a different amount of toe change from one side to the other, steering the car.

We looked closely at the OEM bushing and determined that if we shaped a sleeve in the correct way, we would be able to retain the required articulation of the OEM bushing while significantly filling the void and thus drastically reducing the bushing deflection. We’ve been testing these inserts for a few months on a number of different cars and so far the results are very promising. While our Front Lower Control Arm Bushings were an 70% improvement in the darting and shaking during braking, these inserts filled in that last 30% and the result is a very confidence-inspiring front-end.

If you just enjoy driving around town and having a responsive, fun feeling car – but you don’t brake at the limit of ABS or go to the track, then these inserts are really not required. The front lower control arm bushing is what you want – as that reduces the compliance in the lateral direction which is what you feel the most.

This insert is of most value to those of you who daily drive your car and still appreciate a quiet and smooth ride, but want to eliminate that unpredictability under heavy braking when on track or when pushing hard in the mountains.

For those of you wondering about a solid bearing solution: In 2010 we developed a full spherical bearing for our Nissan 350z racecar, and that bearing continues to be in Kels to this day – 11 years later! MPP.R will release a similar design (in fact that 350z bearing can almost pop right into the Model 3), for those of you that are hard-core track focused drivers that aren’t concerned with NVH.

We designed these inserts for the most ideal shape possible, and they are CNC machined using a 5-axis to the exact shape. We’ve machined grooves into the part to add grip to the rubber bushing, as well as a specific shape to prevent the bushing from pushing out the insert. As with more MPP parts they are anodized in blue. In hindsight, the design is likely a bit too obsessive, requiring a lot of surfacing and machining time with a very small endmill. In the future, we may redesign the part to reduce the excessive machining time and to reduce the cost. However, considering the performance benefit these little inserts offer, the value is quite high – especially considering how easy they are to install compared to a pressed bushing replacement.

We tested the OEM bushing on a press with and without our inserts and measured the deflection. As expected, the OEM bushing’s rate is extremely low until the void “blocks”. While we do not have the correlation of what 4mm of rearward hub movement works out to in terms of toe change on hand, I can tell you with confidence that 4mm of movement in a suspension system is a MASSIVE amount, and that’s why you’re feeling such violent actions in the front of the car when braking at the limit, especially if your alignment has toe-out to begin with. 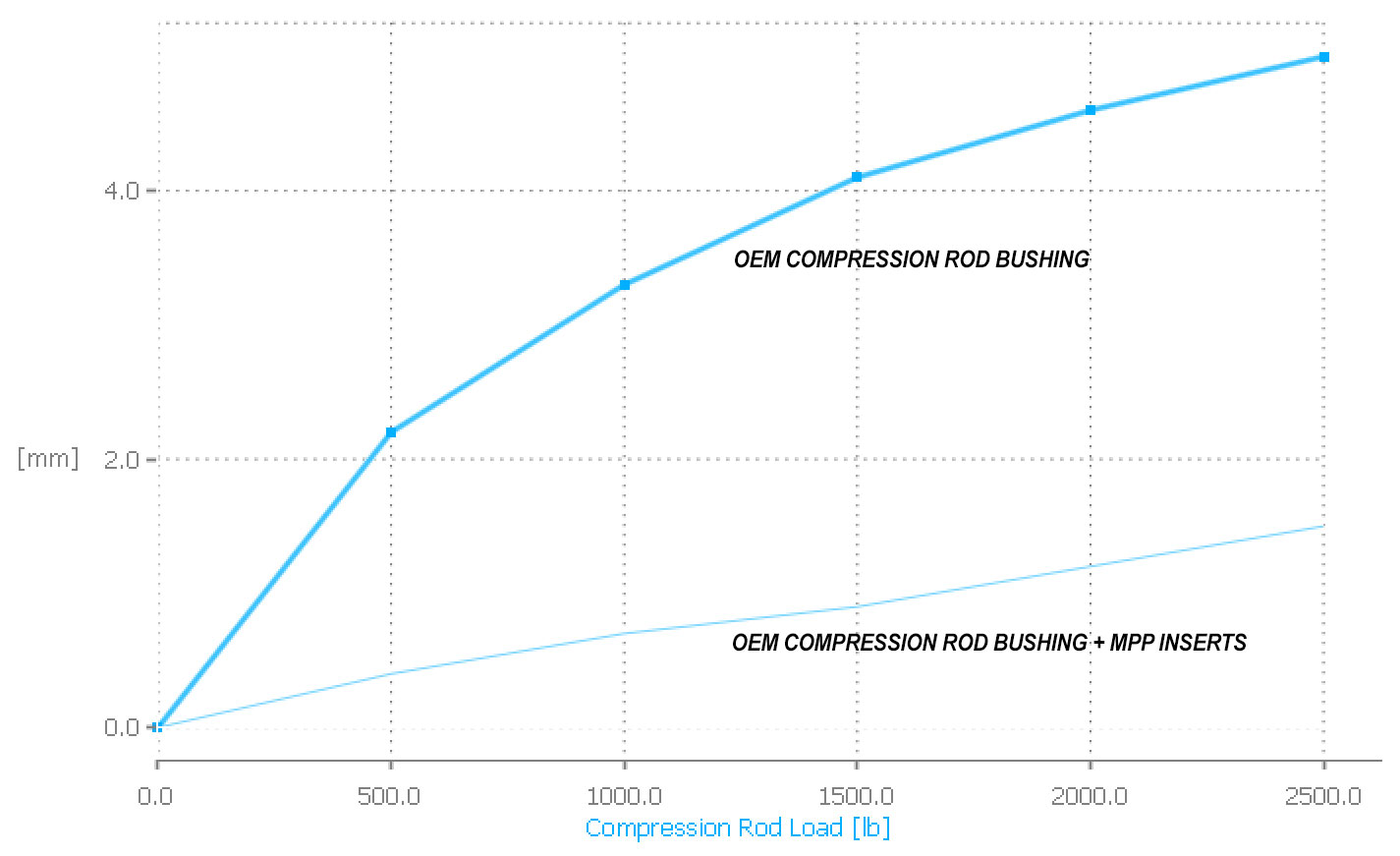 Tesla Model 3 Compression Rod Bushing at 3000lbs load, with and without MPP Insert

The data shows that the 500-2000lb range is where our inserts make the biggest difference – beyond that the void has fully crushed and the rates are fairly similar. However, just look at that massive difference – at 1500 pounds of load the inserts remove 75% of the bushing’s deflection.

At the time of writing, we have not used these inserts for a long enough period of time to determine if they extend or reduce the life of the OEM bushings. The OEM bushings do wear quickly with track use, and it’s logical to project that with reduced travel of the bushing, these inserts should extend the life of the OEM bushings. However, at this time we wanted to get these inserts out into the community for those of you who are hungry for them. If you’re concerned about bushing wear or damage, please DO NOT buy them right now until there is more long-term testing to report. Again we don’t anticipate any issues, but we want to be clear as this is a bit of a unique product in a very dynamic application.