The factory Model 3 and Model Y desperately need more camber on the track, but not much if any on the street. What if you could quickly dial in more camber when you get to the track, and then set it right back to stock before you drive home? Well, now you can.

Fits these vehicles: All Model 3’s, All Model Y’s.

Long-awaited, our MPP Corkscrew Front Upper Control Arms were a complex and challenging part to develop. Originally we had planned not to develop an arm to replace the OE front upper, simply because of how impressed we were by the stock arm. The factory arm is a lightweight, stiff, and thin part with a ton of compression travel before chassis interference. We thought it would be possible to achieve acceptable camber adjustment elsewhere, but that proved to not be the case.

As you'll know if you've been around in the community for some time, our arms were the first ones to match Tesla's range of travel, and the first ones to use OEM ball joints and sealed OEM spherical bearings. They were also the first to use a drop in ship design, allowing for camber changes in as little as one minute - without removing a wheel!! Since that time some other companies have copied significant aspects of our designs and claimed them to be "innovation", which is unfortunate. If you have questions about why we believe our arms are better designed and superior in function, please don't hesitate to send an email and ask. Our parts are not "cheaper" because they are worse, they are less costly because we've committed to having the smallest margins possible to give our end customers the BEST products for their hard-earned dollar. We're proud to announce that with the purchase of a 5-axis CNC we've now been able to lower the cost of our FUCAs even further!

The Model 3 and Model Y have a serious lack of front camber - and any of you that have taken your car to the track know that from the tire wear. When the sidewalls start becoming the tread of the tire, that's bad! Due to the suspension geometry, the car doesn't gain very much camber when the vehicle is lowered, or in roll. Statically shortening the front upper control arm helps both to increase the camber gain with suspension travel, and obviously to increase static camber. Lap time improvements are in the order of seconds when stepping from roughly -1 degree of camber to -3+. This is no small change! 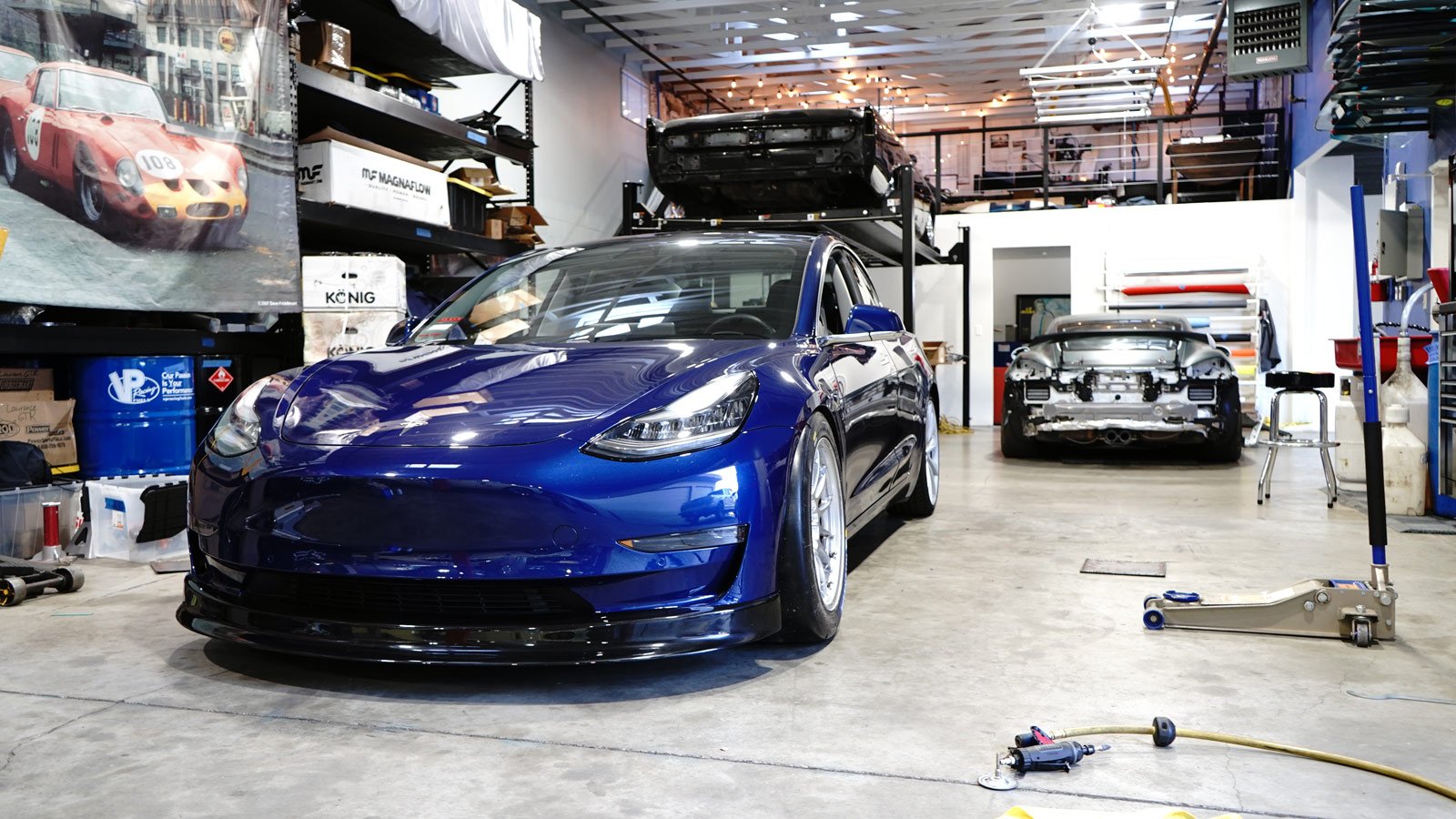 In designing this arm we had our work cut out for us, but what you see here is a suspension arm with pure motorsport DNA, that is designed to have zero compromises on the street. While it would have been easy to put some open spherical bearings on the inboard end, we opted to keep OEM sealed bearings and ball joints throughout to ensure that these arms would endure the test of time, and not leave your silent Model 3 squeaking and creaking over every bump a few years down the road. These OE sealed spherical bearings and ball joints come from high-end European cars, and these joints are designed to last for tens if not hundreds of thousands of miles without degradation. 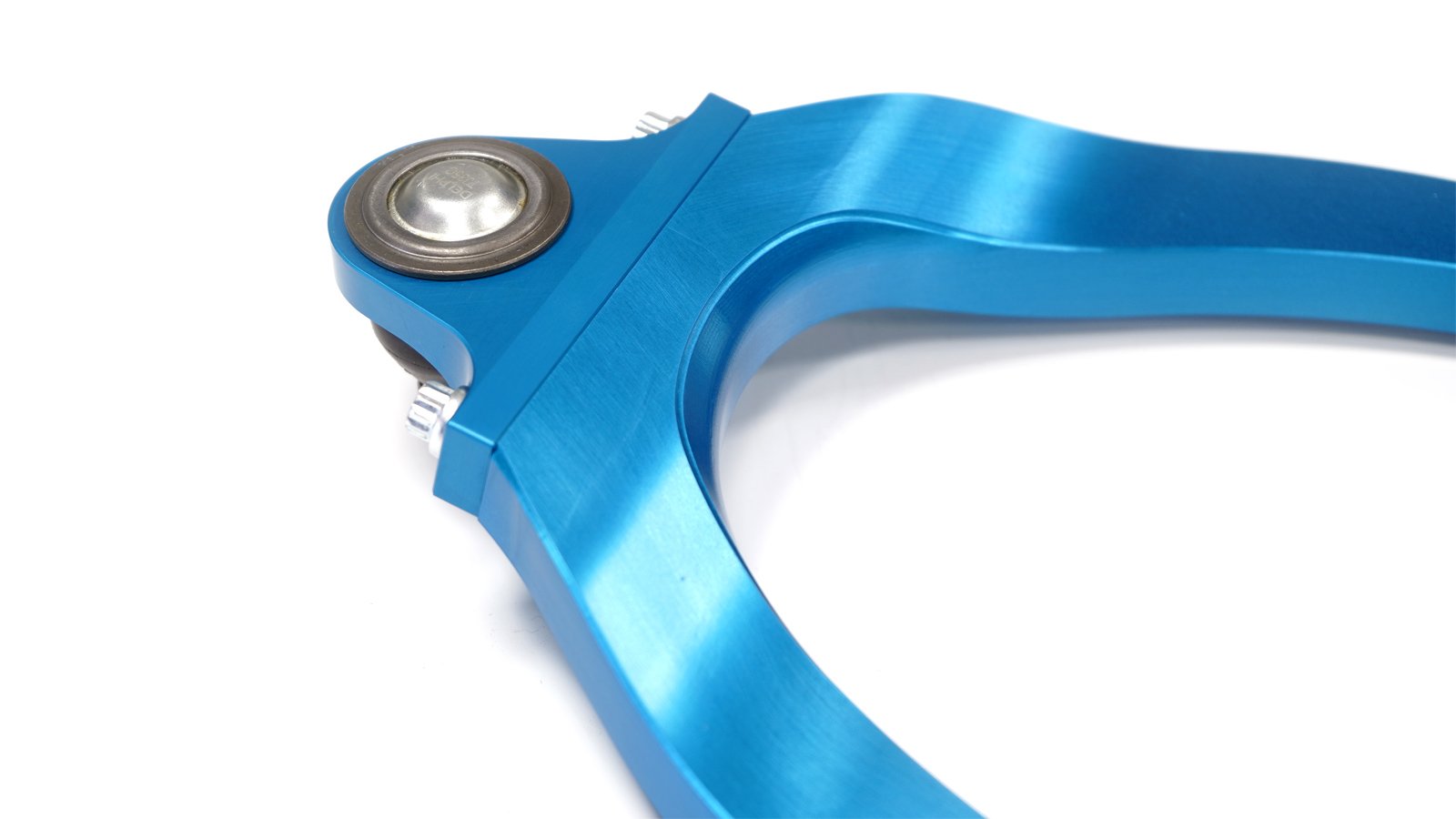 The camber adjustment mechanism uses shims - basically making camber settings infinitely repeatable. This is a huge advantage as it offers the end-user or the alignment shop the ability to drop in shims for a "track" alignment and then set it back to stock in a matter of minutes. We have a video coming soon that shows just how quickly a camber adjustment can be made (we're talking about less than one minute per side to make a change, the wheel doesn't even need to come off!). We have even prepared matching toe adjustments for various camber shim stacks. Say you want a street alignment with -1.5 degrees of camber, but want to turn it up to -3.4 degrees when you get to the track. No problem. Just take out the shims in the camber arm, turn the tie rod the exact number of turns specified in our instructions, and the toe will be within 1mm of where it was prior to the camber adjustment. When it's time to go home, simply pop the shims back in and set the tie rods back. We're talking about a few minutes per side to do this! 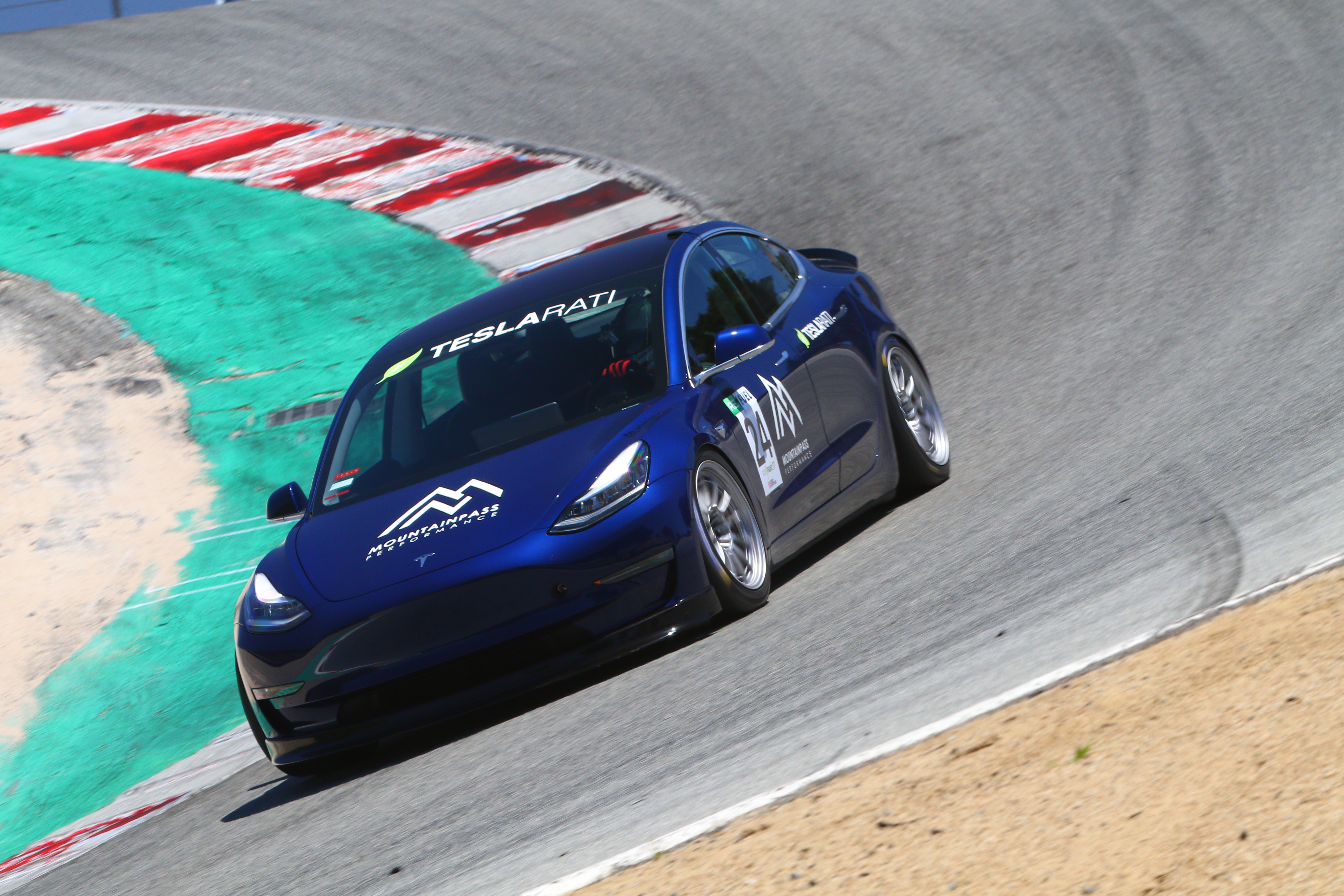 MPP Corkscrew camber arms - named after the highest compression corner in North America where we ran these arms through their paces, and set a new EV Production Lap record doing it!

The arm has been sculpted for maximum clearance in vertical travel, and we were able to get the same amount of upwards travel as the OEM arm - an impressive feat considering we also had to add in a camber adjustment mechanism at the outer part of the arm. As an update in Late 2020, we've updated our design to be side to side specific to allow for additional travel clearance for the Tesla Model Y. We are able to do this WITH A PRICE DECREASE due to the investment in 5-axis machining. The finish of all of our products has also improved with the use of 5-axis machining.

While there will surely be some cheaper (and sometimes more expensive!) options available in the future, we are confident none will be as easy to adjust as ours or be as quiet and smooth on the street. As always, we focus on bringing motorsport performance to a road car with no compromises. We hope that those in the community will distinguish and point out the copycats from the originators, as it's the only way we can continue to bring real motorsport-inspired, no-compromise parts to the Tesla platform.

These arms include shims in 2mm steps to go between stock camber (around -1.2 degrees when lowered) and -3.4 degrees of camber. For those wanting less than OE camber, we can provide additional shims and longer bolts on request. The suspension arms are 100% bolt-on and can be installed in around 2 hours by a competent experienced mechanic. The entire kit is made from CNC cut, North American sourced 6061 Aluminum billet.