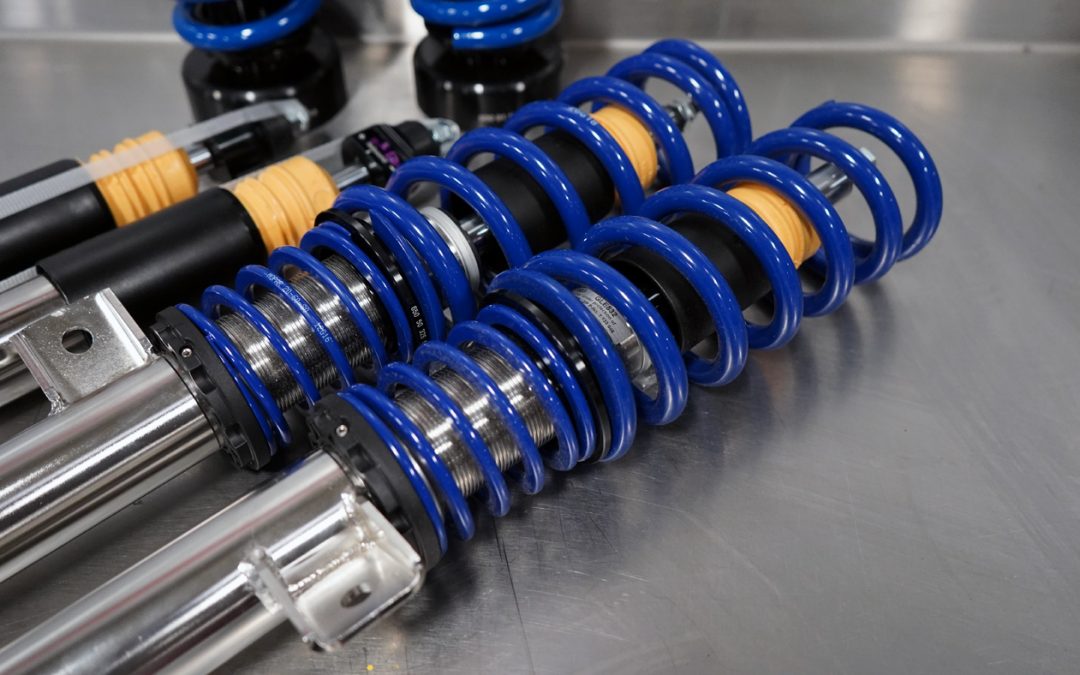 We have been asked a few times lately why someone might want to opt for coilovers rather than just lowering springs. After all, lowering springs are cheaper and achieve more or less the same result, right? Well.. without sounding too biased I will explain why the result is certainly not the same.

From our perspective, this is all very interesting. We’ve been part of the automotive aftermarket for nearly twenty years, and for that reason, we take certain things for granted (in this case that is the general understanding of the limitations of lower springs). “Tuning” Teslas and electric cars is new to us all. The forums are ripe with misinformation, and there isn’t a base of knowledge that people can look up related to Teslas or electric cars to get accurate information.

If you were buying a BMW, a Subaru, or a Porsche, you could search on the forums and see legacy posts from older versions of the car – but that still carry through most of the same principals. With Tesla specifically – that doesn’t exist. So it’s no surprise we’re seeing some misinformation spread. That’s what the internet is great for after all!

The best thing about lowering springs is that they are cheap. But as with most things, you get what you pay for. It’s important to consider the full cost to get your car lowered as well. The cost of the springs is actually the cheapest part – the installation and wheel alignment is more expensive than the actual parts most of the time. So when comparing on cost, remember that the cost to install coil-overs is the same as the cost to install lowering springs – so the total cost difference is not as large when it’s all said and done (i.e. coilovers are not 5 times more expensive than lowering springs).

Some may argue that the installation of coilovers takes longer than lowering springs – to them I say this: The additional time it takes to use a spring compressor on the OEM front damper with lowering springs, you can set the heights of the coilovers to our recommended settings, and have enough time left over to make a quick adjustment or two.

So the main advantage of springs – their cost – is slightly diminished when you consider the full costs for the project. We’ve actually seen on the forum lately some members have bought springs and weren’t happy with the height of the car, so they removed the springs or opted for different springs. By the time you buy a second set of springs and pay for labour to install OE springs and then put back different lowering springs, you’ve now just about spent more than what coilovers would cost – which can obviously be adjusted to whatever height you desire.

The next point I want to address is matching the damper (what most call the shock absorber) with the springs. This is really important with the Tesla Model 3. The Model 3 has been designed to make significant use of the bump rubber (this is often called the bump stop). I believe the gap between the damper and the bump rubber at the OE ride height is less than 10mm. This means that as soon as you lower the car, you are engaging the bump rubber AT ALL TIMES – it’s worth noting that the OEM bump rubber is very progressive, so it doesn’t get very harsh until it’s been compressed a fair bit. This means the suspension is effectively a very aggressive progressive spring. Every bump you hit will become nearly solid as the bump rubber gets progressively stiffer to a point where it is nearly solid, plus the stiffness of the spring. You could conceivably cut the OEM bump rubbers, but doing so would remove the progressive nature of the bump stop and effectively make it into a solid block when you do hit it. So rather than the car gently engaging the bump rubber, it will feel very violent, especially with soft springs!

A coil-over suspension system that has been properly designed for a lower ride height will have significantly more travel – both before engaging the bump rubber and also even after engagement. This results in a similar ride to OEM – in fact even more compliant as we have more bump rubber gap than the OE dampers do. But we’ll try not to make this post specific to our dampers.

A coil-over suspension system will also have the damper forces customized for the spring rates run on the car, and may even have adjustable damping forces so that the end user can fine tune how stiff or soft he likes the ride. One thing to watch out for here that has been plaguing the industry since forever is the use of cheap coilovers that claim to have a wide range of adjustment that actually do nothing. Some of the most popular coilovers we’ve seen offer 16 to 32 clicks of adjustment and do actually absolutely nothing!

Changing springs without also changing the damper is a band-aid fix and is something that the tuning industry has for the most part accepted as something that is avoidable if at all possible. Usually, the enthusiast would be advised to do an upgraded damper with a lowering spring, or do a full coil-over solution. And often times with poor quality coilovers, a lowering spring and a damper will be a better solution than the cheap, harsh coil-over. We can’t stress that enough. I ride in some cars that have coilovers that literally make my teeth want to fall out. They are not all the same!