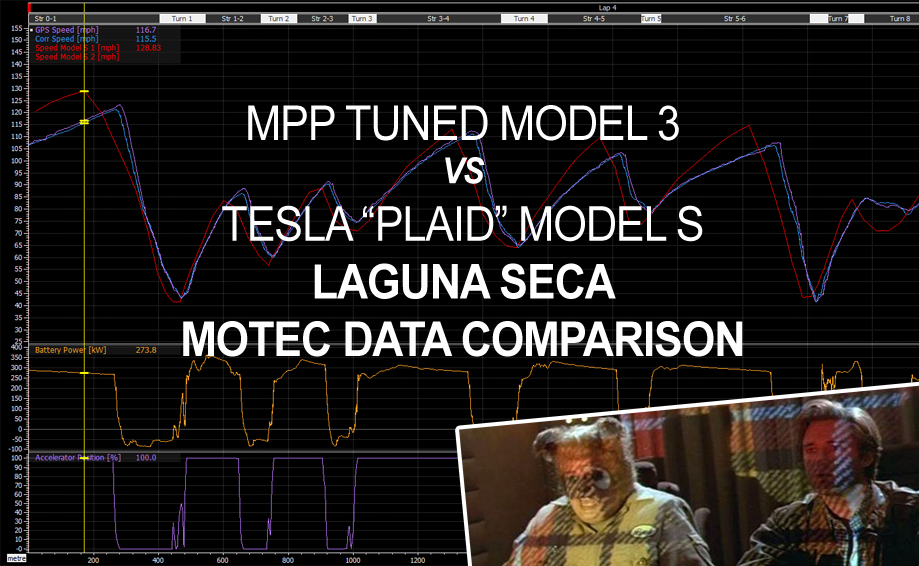 As everyone that follows Tesla knows, Elon just announced a new “Plaid” version of the Model S to tackle the Nurburgring. That same car also went to have a go at Laguna Seca, and they beat our record by 1 second.

We were curious to find out just how much power this Model S likely has, and without having access to the data from the car itself it’s a little bit difficult to do that.

But, using MoTeC’s i2 data analysis tools and a couple of hours, I manually plotted the speed at various parts on the track estimating the position from the video of both our run and the Tesla lap. It was possible to get the synchronization within a few meters – but beyond that it became difficult due to the different camera perspectives and driving lines.

So let’s take a look at the speed versus distance plots. If you haven’t looked at one of these graphs before, the steep downward lines are the braking zones, the slowest bits are the corners, and the upwards parts are obviously acceleration.

What is instantly clear is that the Model S has a massive amount of acceleration – on average about 12mph in each relatively short straight away faster than a Performance Model 3. Impressive considering the Model 3 performance is no slouch!

The next thing that can be observed is that the Model S driver is taking it relatively easy in the braking zone, but is setting the car up for the exits and is doing a better job getting strong runs out of the corner. I think this is a good lesson for myself to focus more on the exits and less on bombing speed into the corners – however it is also possible that all of the data is out of sync by a few meters, exaggerating this effect.

With that said, and due to the grippier tires we were running, the gains on braking and entry with the Model 3 are staggering. I’m actually slightly surprised by looking at this data that the Model S was 1 second faster.

Now we need to do a little bit of math to rough out average forward acceleration from the Model S, and from that, we can loosely guess the power level. But from the data and my experience working with racecars that run at various boost levels – it looks to be well over 300hp more than the Performance Model 3 – maybe as much as 450hp more, especially at higher speeds where the Model 3 speed starts to plateau the Model S just keeps going! This of course assumes the Model S weight is fairly similar to a normal P100DL.

You can watch both the Model S and our video side-by-side to see the real difference in driving style and vehicle abilities. Here is our run:

And here is Tesla’s run with the “Plaid” Model S that was 1 second faster.

Mega congrats to Tesla for making a Model S go this quickly on DOT approved tires, and it’s very exciting to see the company getting excited about going as fast as possible on racetracks 🙂